“Wilma Stockenström wrote about censorship, that we were to fear. Wilma didn’t know that as she collated one long passage-length of pages for the first number, and as Casper Schmidt silk-screened a cover, taking one day into the next into the next, that at our launching party no less than eleven of our guests were to be arrested. We didn’t know that Jenny Frazer was to leave the country; that Jeremy Cronin was to get seven years for terrorism; that Don Mattera who led our frequent poetry readings was to be banned. We weren’t to know that. Nor that one Jacobsen twin was to be taken after that party, and Vicky Cassirer was making a last public appearance. And when the cops came, they took the mine manager next door, too, because they’d spied from a tree that he was banging a black girl. We weren’t to know any of that.”

In this piece Stockenström argues against writers falling into the cowardly trap of self-censorship when facing state censorship.
Wilma Johanna Stockenström (born 1933), was one of Izwi’s editors and is a South African writer, translator, and actor. She writes in the Afrikaans language, and along with Sheila Cussons, Elisabeth Eybers, Antjie Krog and Ina Rousseau, is one of the leading female writers in the language. 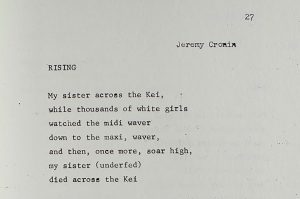 An Extract from the poem “Rising” by Jeremy Cronin, published in Izwi August 1st, 1972, vol.1 no.5 p. 27.
© Izwi
Jeremy Cronin is the South African Deputy Minister of Public Works. He is also a writer, author, and poet. A long-time activist in politics, Cronin is a member of the South African Communist Party and a member of the National Executive Committee of the African National Congress.