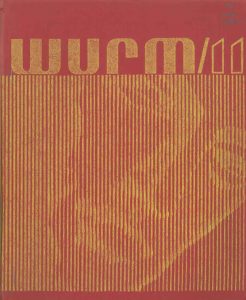 ​Cover of Wurm 11, April 1969
© Wurm
Wurm (Worm) was published from June 1966 to April 1969. The founding editor was De Waal Venter, an Afrikaans writer and poet, the Pretoria-based poets: Phil du Plessis and Marié Blomerus took over the editorial function from 1967.

​Izwi, October 1st, 1971, vol. 1 no. 1 Cover by Casper Schmidt
© Izwi
Casper Schmidt was primarily a poet but expanded into the realm of art, specialising in silk-screens, monotypes, woodcuts and later pottery. 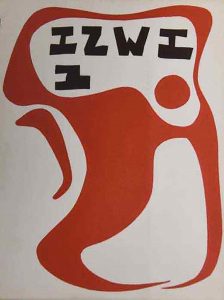 “Death of a little magazine” by Stephen Gray was published in the journal Contrast Vol. 11 No. 2 April 1977:

“Izwi – or to give it its full name, Izwi/Stem/Voice – first came out on October 1, 1971. That was because Phil du Plessis, having put the last few issues of the Pretoria-based Wurm to bed, killing it with an eleventh number that paid homage to the Sestigers1 as their decade ran out (Wurm 11 included such gestures as a French letter stapled onto a page for André P. Brink), moved to the mines of Johannesburg and thanks to his capacious house and open Sunday meals, extravagant patronage and skill with a Gestetner2, Izwi was to appear every two months non-stop for 20 numbers until December 1, 1974, when, with 150 writers and poets, and 50 artists behind it, Izwi, too, bit the dust, like many of its contributors: banned, jailed, exiled, suicided, buried.”

“It began mainly because over dinner with Lola Watter someone said that Herman Charles Bosman had run various fly-by-night literary mags, and someone said Stephen Black had always run The Sjambok in Johannesburg, and someone else said that Nat Nakasa’s kind of The Classic was languishing, and someone else said there must be a place where Johannesburg writers can do something, not post to Contrast, or post to Ophir or Bolt, and that the word Izwe (meaning voice) could be typographically smartened into Izwi: it would be 40 pages long with 4 prelims, be frequent, be hand-made, duck publicity (and even the word “samizdat”3 was gleefully bandied), and it wouldn’t go for smart, undying literary quality – live, younger writers could have their say, and get, through it, to the only newspaper that ever paid some interest, Rapport. Phil du Plessis and I were already poetry editors of New Nation, and there were poems that staid monthly could not countenance.”