“Next: dinner with Oswald Mtshali. Oswald knew where black poets could be discovered by the dozen. Black poets walked in in the form of Sydney José, raconteur; Sydney José took the Izwi Volkswagen to collect contributions, and the Izwi Volkswagen was found on the road to Gaborone, burnt out. Mike Dues would help in weekend-long roneoing sessions; Don Mattera produced his autobiography, connecting Izwi with his youth during the Sophiatown Renaissance. Jenny Frazer contributed a poem from her commune near Riversdale; Jeremy Cronin, a few from U.C.T. Jeanne Goosen and Wessel Pretorius were going to be reliably prolific. Marié Blomerus was a link with Wurm, Barney Simon with The Classic.”

Oswald Mbuyiseni Mtshali (1940 – ) wrote poetry in Zulu and English. His first anthology Sounds of a Cowhide Drum was one of the first books of poems by a black South African to be widely distributed. It won the Olive Schreiner Prize in 1974.​ 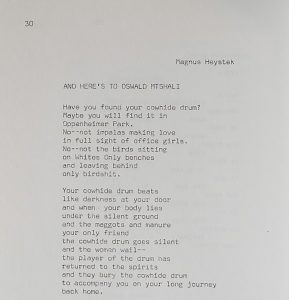 Extract from “And here’s to Oswald Mtshali” by Magnus Heystek
Izwi August 1st, 1974, vol.3 no.17
© Izwi
Magnus Heystek is now a Director and the Investment Strategist of Brenthurst Wealth. He is the author of several books on investment and retirement planning.