“P.O. Box 86, Crown Mines, Johannesburg 2025 became the culmination point of a grapevine that stretched by devious channels up to Maun (black schoolgirls sending Botswana fables), Turfloop, Windhoek, Ovamboland, Karibib. One of the keepers of the Port Elizabeth snake park sent us his first poem. Colin Style sent us his latest from Salisbury. One never knew how the connections were made. One learned that there were many Southern Africans who want to be poets because they believe that would break their isolation. One learned that there are nurses in Estcourt, messengers in Taung, journalists in Mont-aux-Sources who hope that, even if their statements are blotched out on roneo paper and stapled into one of 200 copies, they would be recognized. The postbox filled with pleas, the odd subscription, intimacies between writers that parents and police would never know; and medical circulars and bills.”

“And people were generous in return. Peter Clarke printed a graphic for Izwi till his screen bust at 222; then, because we wanted to expand to 250 per issue, he made another screen and printed a further 28. Helmut Starcke spent a fortune printing four graphics in four colours, which we would give away free as an incentive to subscribers. Some dealers bought copies at 50c each and flogged the graphics at R5.00 a go, throwing away the rest of the magazine. We printed a Wopko poster of the Swart Gevaar at Wilgespruit, which had just had its house put in order, and it ended up pinned on Athol Fugard’s wall. But no-one made anything out of Izwi. Phil fled, then, to Lüderitz in the Namib Desert.”​ 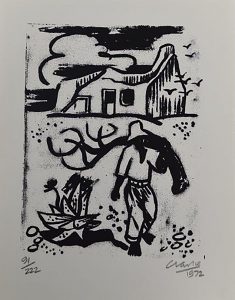 Peter Clarke (1929 – 2014) was a South African visual artist working across a broad spectrum of media. He was also a writer and poet. Clarke was best known for his graphic prints, particularly his woodcuts, and in later years he moved into collage. He also used leather, glass, found objects and other mixed media to produce his colourful work. Described as a “quiet chronicler”, his work offers a critique of South Africa’s social and political history over 60 years. He received six international as well as six national awards for his art and writing.

Helmut Starcke (born 1935) was an artist of German birth but who moved to South Africa in the 1960s. He was a founder member of the Artists’ Gallery, Cape Town and started his own Graphic Design Studio. From 1973 – 2000 he lectured in graphic design at the Michaelis School of Fine Art, UCT. He has participated in several exhibitions including the Venice Biennale, Sao Paulo Biennale and the South African Breweries Exhibitions and has held solo exhibitions. 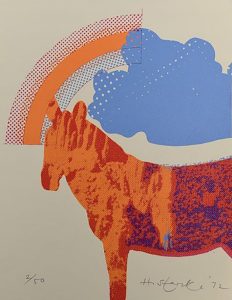