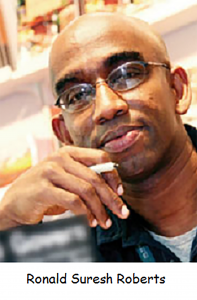 Ronald Suresh Roberts published a biography of Nadine Gordimer titled No Cold Kitchen in 2006. She had initially granted Roberts access to her personal papers and interviews with the understanding that she would authorise the biography in return for a right to review the manuscript before publication. They failed, however, to reach an agreement over Roberts’s account of the illness and death of Nadine’s husband and an illicit affair Gordimer is alleged to have had in the 1950s. Her views on the Israel-Palestine conflict were also part of the disagreement as well as Roberts criticising Nadine’s post-apartheid advocacy on behalf of black South Africans, particularly her opposition to the government’s handling of the AIDS crisis.

Roberts ended up publishing independently and Nadine disowned the book, accusing the author of breach of trust. The biography also stated that Gordimer’s 1954 New York essay titled, ‘A South African Childhood’, was not solely biographical and contained some fabricated events.