Although payable gold was not discovered by Fred Struben, it was Fred Struben who, despite being laughed at by other prospectors, worked out that the banket rock was gold-bearing. Banket is rock which is studded with pebbles, often with veins of gold in between, washed down by an ancient, now extinct river and solidified. One could thus say that Fred Struben played a pivotal role in the discovery of the main reef which led to the establishment of Johannesburg and the other towns on the Witwatersrand.

Fred Struben found gold on the farm Wilgespruit owned by Louw Geldenhuys, who had invited him to prospect for gold on his farm, in what is now Roodepoort. He named the mine Confidence Reef, a reflection of his belief that he had found payable gold. But the gold ran out after a year. Although Fred had not discovered the main reef, it was two of his and his brother Harry’s workmen: George Harrison and George Walker who discovered the main reef in the first quarter of 1886.

This little gem, which tells the early history of the discovery of gold, is signed by Fred Struben himself. 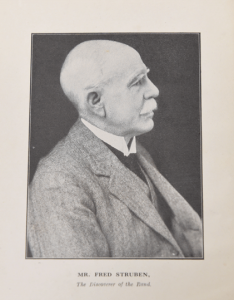 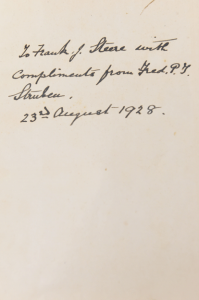 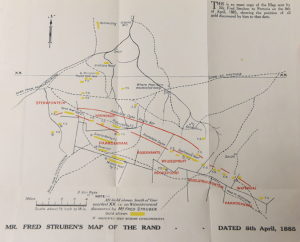 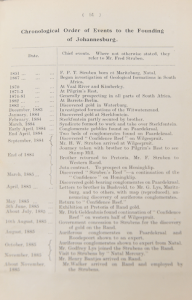