Shovel and sieve by Eric Rosenthal

Who were Jacques Lebaudy, Carl Hanau, Carl Mauch and James Pratt? They and many others were once well-known but now largely forgotten men who lived in or were associated with Johannesburg, the Witwatersrand and gold. Eric Rosenthal brings them to life in this delightful book. As he says in his foreword:
“This book is a monument to that lively and unhonoured fraternity of South Africans I knew as a boy, the prospectors who searched for gold and other mineral wealth – often without success but never without a dazzling optimism. Others made the millions; they had the fun. From them and from the lips of the accompanying band of inventors, detectives, magnates and stock-brokers I heard the yarns that, in most cases, are here set down for the first time.” 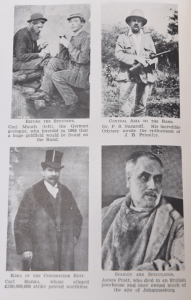