We have measured the antiferromagnetic spin-density-wave (SDW) order in Cr/Cr97.5Mn2.5(001) superlattices. The Mn doping creates a high Néel temperature layer that confines the incommensurate SDW order within the Cr layers. With temperature cycling we observe a transition from commensurate to incommensurate SDW order and discrete changes in the SDW period. We find that these transitions show significant hysteresis (up to 75 K) when the number of SDW nodes within the Cr layer changes by an odd number, while there is no hysteresis for changes of an even number of nodes. This results from the competition between maintaining the spin structure at the interfaces and introducing a spin slip at the nodes of the Cr SDW. 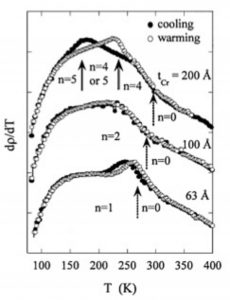 Figure: Derivatives of the measured resistance vs temperature during warming and cooling cycles. The dashed arrows indicate the temperatures where the neutron scattering determined a transition from ISDW to CSDW order. The two solid lined arrows indicated for the 200-Å sample where the neutron scattering determined transitions from n=4 to n=5 nodes in the Cr ISDW. The single lined arrow corresponds to cooling, while the double lined arrow marks the transition during warming.

Influence of V and Mn doping on the electrical transport properties of a Cr + 1.2 at.% Ga alloy 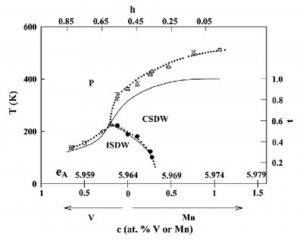 Antiferromagnetism in a Cr86Ru14 alloy

The magnetic behaviour of an antiferromagnetic polycrystalline Cr86Ru14 alloy has been investigated experimentally through electrical resistivity (ρ), thermal expansion, elastic constants and neutron diffraction measurements. This Cr–Ru alloy represents an important and interesting position on the magnetic phase diagram, just below the concentration where Ru addition totally suppresses antiferromagnetism in the Cr–Ru system. The neutron diffraction investigation shows the alloy to have commensurate (C) spin-density-wave (SDW) ordering below the Néel temperature TN = 294 K. Magnetic anomalies are observed in the temperature and pressure dependences of ρ, giving dTN/dP = −41 K/GPa, which is more than an order of magnitude smaller in its absolute value than that observed for the CSDW to paramagnetic Néel temperature of very diluted Cr–Ru alloys, such as Cr99.7Ru0.3. The thermal expansion measurements give a magnetovolume of |Δω(77 K)| = 2 × 10−4 for CSDW Cr86Ru14 at 77 K compared to a much larger value, |Δω(77 K)| = 32 × 10−4, for CSDW diluted Cr99.7Ru0.3. The long-wavelength acoustic-mode Grüneisen parameters for Cr86Ru14 calculated from the temperature and hydrostatic pressure dependences of the elastic constants show that the effects of the CSDW on the vibrational anharmonicity near TN is substantially weaker than that observed in the diluted Cr99.7Ru0.3 alloy. Anomalous elasticity behaviour is observed for Cr86Ru14 in the temperature region of the Néel transition that is ascribed to antiferromagnetic Q-domain effects.

Measurements of the temperature and pressure dependences of the longitudinal-mode ultrasonic wave velocities (νL) as well as the temperature dependence of the electrical resistivity (ρ) of a Cr1−cFec alloy single crystal with c = 0.0172 are reported. The νL−T curve displays two prominent anomalies of magnetic origin. One is a deep minimum at the Néel temperature (TN = 274 K) and the other a sharp change in slope at a lower temperature Tt = 243 K. The anomaly at Tt is absent on the ρ−T curve, but the Néel transition is accompanied by a very prominent continuous rise in ρ on cooling through TN. The observations at Tt cannot be directly explained in light of the present magnetic phase diagram of the Cr–Fe system. There is a large contribution of about 50% from magnetic effects to the residual resistivity of Cr+1.72 at.% Fe at 0 K. This contribution is ascribed to spin-density-wave and local impurity effects. 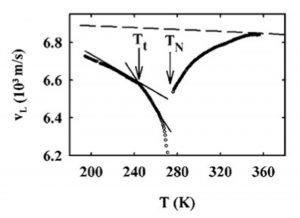 Figure: The temperature dependence on heating of the longitudinal wave velocity, vL, for the Cr+ 1.72 at. % Fe alloy single crystal. The broken curve shows the expected nonmagnetic behavior determined using the results on Cr+5 at. % V. The solid lines indicate the linear behavior in the regions below and above Tt and are guides to the eye added to make the vL anomaly at Tt more visible.

Dimensionality effects on epitaxial and polycrystalline Cr1−xRux alloy thin films and in Cr/Cr–Ru heterostructures are reported. X-ray analysis on Cr0.9965Ru0.0035 epitaxial films indicates an increase in the coherence length in growth directions (1 0 0) and (1 1 0) with increasing thickness (d), in the range 20≤d≤300 nm. Atomic force microscopy studies on these films shows pronounced vertical growth for d>50 nm, resulting in the formation of columnar structures. The Néel temperatures (TN) of the Cr0.9965Ru0.0035 films show anomalous behaviour as a function of d at thickness d≈50 nm. It is interesting to note that this thickness corresponds to that for which a change in film morphology occurs. Experiments on epitaxial Cr1−xRux thin films, with 0≤x≤0.013 and d=50 nm, give TN–x curves that correspond well with that of bulk Cr1−xRux alloys. Studies on Cr/Cr0.9965Ru0.0035 superlattices prepared on MgO(1 0 0), with the Cr layer thickness varied between 10 and 50 nm, keeping the Cr0.9965Ru0.0035 thickness constant at 10 nm, indicate a sharp decrease in TN as the Cr separation layers reaches a thickness of 30 nm; ascribed to spin density wave pinning in the Cr layers for d<30 nm by the adjacent CrRu layers. 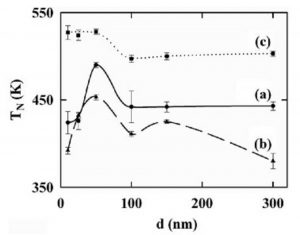 Figure: The Neel temperature (TN) of the Cr0.9965Ru0.0035 thickness series as a function of thickness (d) for samples prepared on (a) MgO(100), (b) a-plane sapphire and (c) polycrystalline quartz. The lines are guides to the eye.