Department of Geology, University of Johannesburg
Under the leadership of Professor Hassina MOURI, Chair and Founder of the South African Medical Geology Division and Councilor for the International Medical Geology Association (IMGA) 2013-2015.

Historically, the “geological sciences” and “medical sciences” were regarded as completely independent scientific disciplines. However, recent advances in science and technology have proven that the geology of an area can have a direct impact on the regional input of elements and nanoparticles of minerals into the soil, air and water. In turn, these inputs, depending on composition and concentration, may result in beneficial or harmful health effects in humans, animals and plants.

Medical Geology is a complex field of science that requires a multidisciplinary/interdisciplinary approach, bringing together experts from various fields of science, including geology, biology, biochemistry, toxicology and epidemiology.

Although there is a growing development in this field in the world, it is in Africa that the application of research results would be most relevant. However, it is in Africa that the field is least developed. The African continent is characterised by a complex and dynamic geological history, including frequent earthquakes, volcanic activity in tectonically active regions, pervasive dust, and water toxicity due to interaction with the geological environment. All these naturally occurring process and materials can have short or long term impacts on human and animal health. In addition, most of the population in Africa lives close to the land, relying on locally produced food and water, and large tracts of cultivated land are arid, semi-arid, or lack essential trace elements for healthy plant growth.

Therefore, considering the significance of the health problems possibly related to the naturally occurring geological issues on the African continent in general, we strongly believe that it is necessary to develop this discipline. This will broaden our understanding of the diagnostic spectrum, as well as assist in therapy for many geological related health issues, and thus improve the quality of life on the African continent.

Research in this discipline is still in its infancy and focuses mainly on naturally occurring geological process and materials, and their possible health effects (such as some types of cancer, thyroid issues, fluorosis, silicosis) on humans and animals in Africa. 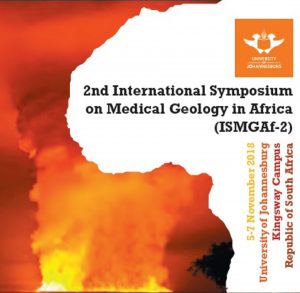 The University of Johannesburg is proud to be hosting the 2nd International Symposium on Medical Geology in Africa in 2018.

For more information about the event, read the ISMGAf-2 Third Circular.

To sign up to attend, please fill in the ISMGAf-2 Registration Form and send it to
hmouri@uj.ac.za.

Keep in touch with our research group and learn about the latest developments in the field via our Facebook page, Medical Geology in Africa: a UJ initiative.

Centre of Excellence for Integrated Mineral and Energy Resource Analysis