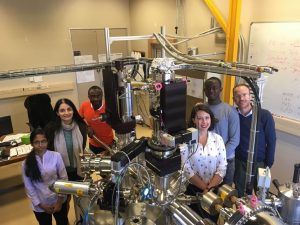 The electronic structure group based in the department of Physics @ UJ is constituted by Dr Bryan Doyle (Senior Lecturer), Dr Emanuela Carleschi (Senior Lecturer), and Ms Arlette Sohanfo Ngankeu (MSc student). Former members are (Mr Prosper Ngabonziza(MSc) who is now a PhD student at the University of Twente in Netherlands and Mr Mubarak Yagoub (MSc) who is a PhD student at the University of the Free State. Our current research topics are mainly based on the study of the interplay between magnetism, superconductivity and other exotic behaviours in correlated transition metal oxides. In fact, one of the most fascinating branches of solid-state physics is represented by the strongly correlated electron systems, i.e., compounds whose physical properties are dominated by strong electron-electron correlations. This is the case when the on-site electron-electron repulsion U is much larger than the energies associated with the overlap of atomic orbitals belonging to different atoms. In a solid these energies are characterised by the width W of the energy band under consideration, determined by the overlap between the orbitals of two adjacent atoms. A large U/W ratio is expected in systems involving well-localised electrons like the 4f and 5f electrons of the rare earths and the actinides, respectively, but also the d electrons of the transition metals compounds.

The influence of the electron-electron correlations on the basic properties of a compound can be understood considering the Mott insulating state [1,2,3,4]. Band theory predicts an insulating state when all bands are fully occupied or empty, whereas a metallic state occurs under different conditions. However, it is possible that the system is insulating because of two electrons sitting on the same site would feel a large Coulomb repulsion, which Mott argued would split the band in two: the lower band is formed from electrons that occupied an empty site and the upper one from electrons that occupied a site already taken by another electron. With one electron per site, the lower band would be full, and the system an insulator. This insulator is called a Mott insulator.

Strong electron-electron correlations can give rise to a large variety of peculiar phenomena such as for example high-temperature superconductivity in cuprates [5], colossal magnetoresistance and charge or orbital ordering in manganites [6], one-dimensional charge and spin self-organisation in nickelates [7], or heavy-fermion and Kondo-insulating behavior in f-electron systems [8,9], and quantum critical phase transitions [10] (i.e. phase transitions whose critical temperature is pushed down to 0 K by the quantum fluctuations induced by an external parameter such as a magnetic field or pressure or chemical composition). The interesting phenomena in 3d transition metal oxides (TMOs) originate from the competition between the localised nature of 3d orbitals and their bandwidth. Due to the relatively small radial extent of the wave function with respect to lattice parameters, 3d-electron systems usually have a small overlap and narrow bandwidth. The discovery of unconventional superconductivity in 4d layered Sr2RuO4 [11] has initiated intense interest in 4d and 5d layered compounds because of the potential to discover novel phenomena, even if electronic correlations are expected to be weaker in the latter systems due to larger spatial extent of their wave functions.

In order to understand the electronic occupation inside the sample, we exploit electron spectroscopy techniques based on electronic excitations inside the solid caused by the absorption of electromagnetic waves. These techniques are:

This spectroscopic technique is a very powerful tool for the probe of the electronic structure of solids. Here monocromatic light is shining on a sample, and absorbed by electrons, which are then able to leave the sample and to be detected. PES is based on the so-called photoelectric effect, for the explanation of which Albert Einstein received the Nobel Prize in 1921. The experiment is done in a vacuum chamber equipped with an electron energy analyser, which is used to measure the kinetic energy distribution of the emitted photoelectrons that may be considered as an image of the occupied electronic density of states in the presence of the hole mediated by the matrix elements. The binding energy of the photo-emitted electrons inside the solids can be derived from their kinetic energy by the energy conservation law. 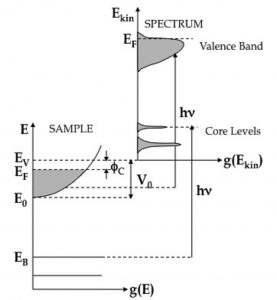 Figure 1. Scheme of the photoemission process in a generic metal. On the left, the energy level scheme inside the sample is shown; on the right, a typical photoemission spectrum is shown. A spectrum is constituted by the distribution of the electrons as a function of their kinetic energy as a result of the interaction with the incident radiation.

This technique is one of the most extensively used and effective methods to study the electronic structure of solids, due to the fact that it gives an almost straightforward picture of the low-lying energy excitations inside the solids responsible for their physical properties by allowing the simultaneous determination of the energy and the momentum of the electrons inside the solids. In the last decade the technological progresses in terms of both energy resolution of the electron energy analysers (~1 meV) and radiation sources (~10 meV), together with the availability of very low temperatures (<5 K), have opened new spectroscopic possibilities and nowadays ARPES is capable to access the relevant energy scales for unconventional physical behaviours in correlated matter.

In a typical ARPES experiment, monochromatic light is shined on the sample, and photoelectrons are detected by a two-dimensional detector capable to measure both the kinetic energy and the momentum of the photo-emitted electrons in vacuum. By applying the conservation of energy and momentum it is then possible to evaluate the energy and the momentum of the electrons inside the solid, and therefore to map the dispersion of the electronic bands, with particular relevance for those electrons lying very close (few meV) to the Fermi level. By analyzing their energy dispersion and line shape, as well as the shape of the Fermi surface, it is possible to get new and exciting insights on the underlying microscopic mechanisms responsible for the physical properties of these systems. 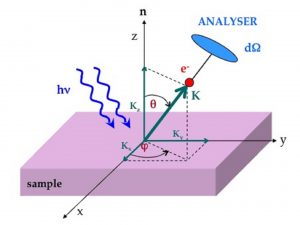 This is a widely used technique giving information about the local structure and the unoccupied electronic states. XAS requires a tunable x-ray source such as a synchrotron. The photon energy is scanned over an interval around the binding energy of a given core level in the sample under investigation. Above a characteristic photon energy (the absorption threshold of a given core level), the core electrons can absorb the incident light and make transitions to empty valence states between the Fermi level and the vacuum level (as sketched in Figure 1 (a)). The XAS profile is expected to mimic the unoccupied density of states projected onto the excited atomic site via the dipole selection rules. 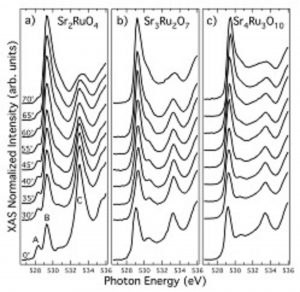 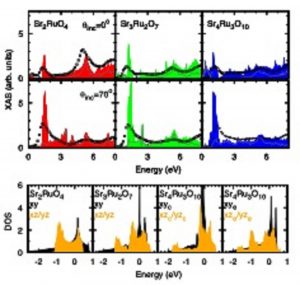 Figure 3. Left panel: Example of x-ray absorption spectra at the O 1s-2p edge for the ruthenate compounds (a) Sr2RuO4, (b) Sr3Ru2O7 and (c) Sr4Ru3O10. The spectra are shown for several value of the incidence angle defined by the direction of the incoming photons and the c crystallographic axis of the sample. Right panel: Comparison between XAS experimental results (empty squares) and local-density-approximation theoretical calculations projected on different excited core-holes symmetry. (from M. Malvestuto, E. Carleschi, R. Fittipaldi et al., Physical Review B 83, 165121 (2011)).

Our experiments are performed at synchrotron radiation source facilities located in Europe, such as Elettra (Trieste, Italy), BESSY (Berlin, Germany) and SOLEIL (Paris, France). Our trips to Europe are funded either by the National Research Foundation or the Faculty of Science of the University of Johannesburg. Synchrotron radiation is an indispensable tool for our research, because it provides high-brilliance and high-resolution monochromatic radiation with polarization and energy tunability.

For any further information about our research and opportunities for MSc or PhD bursaries, please contact either Dr Doyle (bpdoyle@uj.ac.za) or Dr Carleschi (ecarleschi@uj.ac.za). 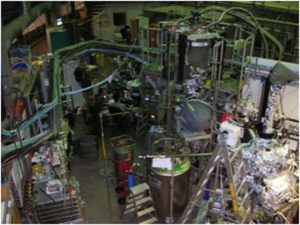 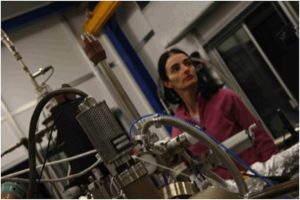 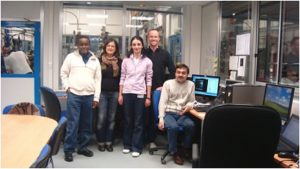 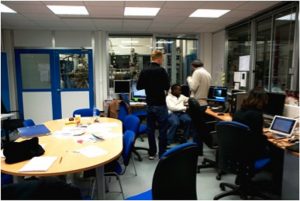 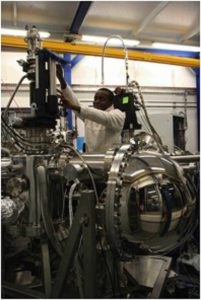 Prosper Ngabonziza moving the sample inside the ARPES experimental chamber of the beamline Cassiopee at the SOLEIL synchrotron in Paris, France (December 2010). 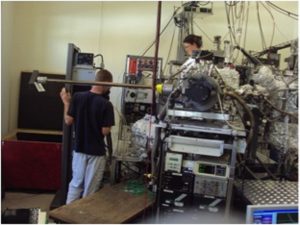 Bryan Doyle and Dr Monica Montecchi checking the pressure in the main experimental chamber of the Surface Science Laboratory in the Department of Chemical Engineering of the University of Modena, Italy (June 2011). 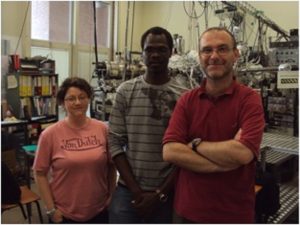 Mubarak Yagoub in the Surface Science Laboratory with Dr Monica Montecchi and Dr Luca Pasquali during his recent visit to Modena, Italy (June 2011). 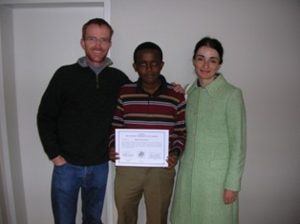