Projects run by the UJ-OSC 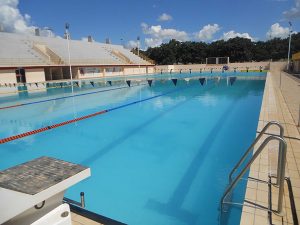 The UJ-OSC is the first Olympic Studies Centre on the African continent and the 38th in the world.

We are dedicated to sharing the principles and practices of Olympic philosophies and activities with professionals and researchers, by sharing resources, hosting events and promoting academic activities to enable research and stimulate intellectual exchange.​

​​International Conference on Historical and Contemporary Issues in Olympic Studies

In July 2011, the 123rd International Olympic Council (IOC) session was held in Durban. This was the first time in 117 years the event was held on African soil. This sparked the idea of creating another IOC footprint on the continent in the form of an Olympic Studies Centre.
After discussions with the executive membership and key stakeholders of the University of Johannesburg, Professor Cora Burnett met with Nuria Puig of the IOC at a United Nations session in Geneva later that year. This initiated a study tour to learn from the most active centres.
In 2012, Professors Burnett and Charl Roux visited the highly acclaimed Olympic Studies Centres in Lausanne, Switzerland, Cologne, Germany and Barcelona, Spain. The then executive director Prof Dr Stephan Wassong of the Cologne Olympic Studies Centre based at the German Sport University paid South Africa a return visit to consult with stakeholders and present the concept. Dr Sam Ramsamy, IOC member and Chair of the Sport for All Commission, fully supported this initiative and gave his blessing for the University of Johannesburg Olympic Studies Centre (UJ-OSC) to go ahead.

What we’ve been busy with

Under the leadership of Professor Andre Swart, the Dean of Health Sciences, the Olympic Studies Centre team from Cologne entered into a consultancy from 2014, and began work on the first joint activity with the UJ-OSC, an Olympic Education Workshop, which was held from 27 to 29 May at the University of Johannesburg.
The workshop was a huge success, attended by representatives of National Olympic Committees from different southern African countries, physical education academics from 13 universities, UNICEF South Africa, Sport and Recreation South Africa and provincial Departments of Education as well as Sports and Recreation. This resulted in an ongoing collaborative national physical education project.
Another Olympic Conference will take place in November and December 2015, and will be the first with international and continental speakers, with the theme of “Historical and Contemporary Issues in Olympic Studies”.
Other major research initiatives from the UJ-OSC, include two senior staff to conduct research at the 2014 Commonwealth Games in Glasgow, which informed a development framework and funding model of the Commonwealth Games Federation’s Development Committee.
Another initiative is the development of a coffee table book in collaboration with SRSA on Indigenous Games, with the theme of “My Roots, My Pride, My Future”, celebrating ten years of the official South African Indigenous Games Project (SAIG).
Having obtained an Advanced Olympic Research Grant (2014/2015), Professor Cora Burnett conducted research in eight African countries and has been networking to make this centre a hub for key strategic partners such as UNICEF, government entities, National Olympic Committees and corporates to exchange knowledge and collaborate.