What Mandela meant for Science in South Africa

As the tributes to Nelson Mandela pour in … we can reflect on his contribution to Science in South Africa.​​​​

We realise, that South Africa would not now be participating so strongly in the process of science if democracy and reconciliation had not been ushered in by peaceful negotiations, culminating in the elections of 1994.

Quality education was reserved for a minority of the population so that the majority was essentially excluded from the process of science, learning and research. The science system itself was non-transparent and geared to the survival of a militarised nation under siege.

This has all changed very spectacularly. As Mandela said “Education is not a privilege, but a right – the doors of learning must be opened for all”. Indeed, South Africa now has a vigorous, healthy and growing scientific research system, open to all, and with an excellent global profile.

Most obviously, South Africa successfully won the bid to bring the major part of the global Square Kilometer Array (SKA) project to Africa. The SKA will soon become the world’s largest radio astronomy telescope, capable of seeing back in time to the afterglow of the big bang, and capable of searching for dark matter, amongst many other fascinating and very impactful topics. This successful bid was well supported by two decades of wise investment in major astronomy infrastructure development and capacity building within the country.

South Africa is now strongly supporting the Namibian bid to host the southern hemisphere portion of the Cherenkov Telescope Array (CTA). This will be the world’s largest gamma ray telescope.

In May this year, South Africa signed an agreement with the European Synchrotron Research Facility (ESRF), where it became the first African country to be associated with this major premier international light source. This reflected the significant level of participation developed over the last two decades by South African scientists from a wide range of disciplines in synchrotron-based research at about ten synchrotrons spread over four continents.

Several years earlier, South Africa signed a government level agreement with the Joint Institute of Nuclear Research (JINR) in Dubna, leading to improved collaboration there. Of the very many impactful local national-scale research infrastructure developments, one can single out the establishment of the National Institute for Theoretical Physics (NITheP). It is significant because it is a visionary step even for a developed country. This has promoted international exchange within this field, and lead to a strong growth in the national footprint of high caliber theoretical physics.

The inclusion of strong support for science at its most abstract, evidences the long range vision of the new democratic policy-makers and excellent rapport between them and the new local and international physics community. Indeed, the first new Science and Technology Policy was adopted during Mandela’s presidency. There are many other examples of new investment in significant local major research infrastructures, as well as in University-based laboratories. The access to research and learning is, of course, now available to all, and in the last two decades, the representation matches the demography of the country. At tertiary level, a mood of optimism has swept through the research community.

One premier international research infrastructure has made headlines many times over the last two years, capturing the scientific imagination of the world. A Higgs boson was discovered at a global science facility, CERN’s Large Hadron Collider (LHC), in July 2012.

In October 2013, the Nobel Prize for Physics was awarded to two of the theorists who predicted the existence of the Higgs Boson. The award citation made specific mention of the discovery at the LHC. South Africa was involved in this global scientific campaign based at the LHC. This gigantic machine will continue to uncover new physics, and amongst others, we expect it to find the particulate content of dark matter, and emphasise the strong connection to the major new astronomy facilities in Southern Africa.

Scientists believe a new golden age of discovery has dawned, in several fields, and happily, because of the transition to democracy, South Africa is now involved.

South African participation at CERN was first recognised at government level with the signing of a Collaboration Agreement on the 4th of July, 1992. This was in fact once South Africa set out on the road to democracy. In those earlier days, South Africa participated in the NA43, NA59 and NA63 experiments and in the use of the ISOLDE Facility.

South Africa formerly joined the ALICE experiment in 2001 and the ATLAS experiment in 2010. These are major global collaborations at the LHC. Theoretical physics interaction connected to CERN has also developed. Spin-offs for South Africa have which have manifested or are in development include IT technology (big data, high throughput data), accelerator technology (research), nuclear energy technology (modeling) and mining technology (ore sorting).

The connection between the appropriate political climate and the opportunity to participate in global science is very clear from the South African example.

The growth of science in South Africa, with many specific examples, such as the direct participation of South Africa in the global science drive to discover the Higgs Boson, owes much to Mandela. However, Tata Madiba, as he is affectionately known in South Africa, would be the first to maintain “What we have achieved is the collective effort of every South African.”

Apart from creating a general political climate favourable to research, Mandela was known to intervene directly when science became politicised. An example was the contentious politics surrounding health issues in South Africa. He appealed, “In the face of the grave threat posed by HIV/AIDS, we have to rise above our differences and combine our efforts to save our people. History will judge us harshly if we fail to do so now, and right now.”

Madela realised that Africa needed new premier scientific institutions, and he championed the formation of the Nelson Mandela African Institute of Science and Technology (NM-AIST), which now has a network of schools spread across Africa. The NM-AIST vision is to become a world-class institution of higher learning dedicated to the pursuit and promotion of excellence in science and engineering, and their applications for economic growth and sustainable development in Africa.

Mandela’s direct involvement in science may be seen as linked to his firm belief about the power of education in building democracy and development. He said, “Education is the most powerful weapon which you can use to change the world”.
It is on this topic of education that I want to end this article. Democracy, seen as one of the “Legacies of Mandela”, ushered in a new era for science in South Africa.​ ​

Sadly, basic education provision has failed to match this. Seen on a general national basis, it is evidently in a state of near collapse, and severely prejudices the sustainability of the magnificent scientific advances. Mandela’s focus on children, and his identification of the importance of education, has in fact not been sufficiently respected.
The contribution of Mandela to democracy in South Africa has therefore paved the way for the South Africa’s scientific renaissance. This has been at the research level. It is imperative, as supported by Mandela’s clear injunction, that the basic education system experience a similar renaissance. 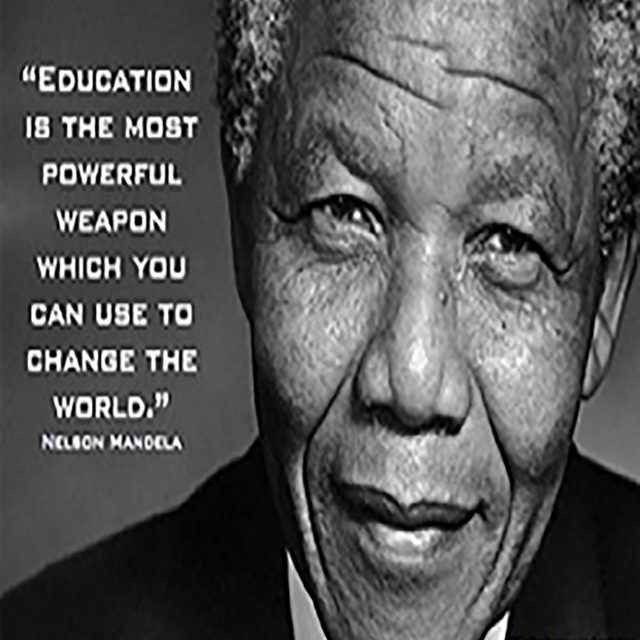