The event was an unqualified success and secured far-reaching networking and branding opportunities for the University and substantially enhanced its reputation. This occasion would not have been a success without the efforts of the organising team, namely Professor Chris Landsberg, Dr Joe Manyaka, Ms Ingrid Waldeck and Mr Thompson Mkansi, each of whom have been awarded the Vice-Chancellor’s Distinguished Award for Outstanding Service beyond the Normal Call of Duty for 2013.

The success of the event was due, in no small measure, to the considerable efforts of Professor Chris Landsberg. In his capacity as holder of the SARChI Chair for African Diplomacy and Foreign Policy he used his diplomatic and political networks, and his acumen to open vital channels of communication between the White House, the US Embassy and the University. Such channels of communication not only secured the visit of President Obama to the Soweto Campus, but also enabled appropriate liaison between different role-players (including the media and individuals and groups opposed to the visit) that ensured the undoubted success of the event.

Professor Landsberg is honoured with the Vice-Chancellor’s Distinguished Award for Outstanding Service beyond the Normal Call of Duty for the pivotal role he played in ongoing and high-level negotiations with the US Embassy and the Office of the President of the United States. His dedication to the cause was exemplary and no requirement to ensure success was beyond his ability and his readiness to be of service. His part in the success of the visit cannot be understated.

Dr Joe Manyaka, Campus Director for the Soweto Campus, played a crucial role in ensuring that the Soweto Campus was in a state of operational and aesthetic readiness to receive the president of the United States of America and his entourage. He was a dedicated member of the team that organized the operations of the event. His alertness to areas of concern, his unflappability under pressure and his ability to recognize and implement solutions for problems was a significant factor in the smooth execution of the visit.

Dr Manyaka, a previous recipient of this award, is honoured with the Vice-Chancellor’s Distinguished Award forOutstanding Service beyond the Normal Call of Duty for his calmness under the pressure of co-organizing an event of the magnitude of a visit by a US President, for his innovation and agility in seeking resolution for problems and for his leadership in assuring operational readiness of the Soweto Campus for the visit.

Ms Ingrid Waldeck played a vital role in the important communications campaign that surrounded the event. She used her vast experience in the organization of events to good effect in performing an important co-ordination role for the planning and execution of the event itself. No detail was too small, no communication gap existed, all dignitaries and participants were fully and expeditiously informed of all the detail that was required by them and all relevant protocols were executed without fail.

Ms Waldeck is honoured with the Vice-Chancellor’s Distinguished Award for Outstanding Service beyond the Normal Call of Duty for her role in maintaining clear and concise channels of communication before and during the event and for her acumen in co-planning an event of this magnitude with a calm assurance that generated full confidence in her abilities among those who participated in the event.​ 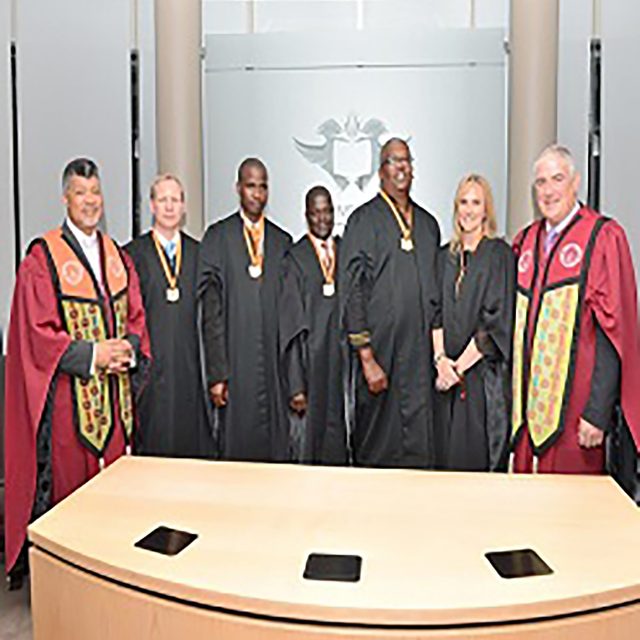