Karabo Mogudi is the first senior men’s football team coach to win the intervarsity football tournament, FNB Varsity Football, for the University of Johannesburg (UJ). In the past, UJ had come close to winning the tournament after losing in two finals in 2014 and 2016.

This was not their first victory in 2021. UJ also won the SAB Blue Stream League under Coach Mogudi.

Coach Mogudi was born in Springs, but moved around different townships such as Orlando East, Rustenburg, and Vosloorus. He went to Letsie Primary School in Tsakane and completed his matric at Barnato Park High School in Berea. He established himself as a football player in Tshiawelo, Soweto, while playing for Mapetla Barcelona Football Club (FC), a Soweto-based team.

“I played football as a hobby. I started taking it seriously when my friend and I were playing for Barcelona. For some time, I also played for Wits FC Colts from 1996. I stopped playing football after suffering a serious injury in 1998,” says Mogudi.

It could have been easy for Mogudi to leave football altogether, but his love for the sport got him involved in the sport as a Wits Under-19 team manager and an assistant coach. That is where his coaching career started (in 1999).

“That is when I started thinking about football at a deeper level. As a player, people play for fun week in week out between matches, tournaments, leagues and other games,” explains Mogudi.

Mogudi was part of the Wits football team from 2002 (which later became Bidvest Wits). In 2009, he left the team to open a coaching academy, only to return to Wits a year later when the students’ team coach was injured. He was with Wits until 2016, and then joined UJ Football in 2017 as the Head of development.

“In 2017, I joined UJ formally as the head of development at the time. My role was to start the academy and development programmes, among other tasks,” adds Mogudi.

The football expert exceled in his role as the head of development and was hired as the UJ Football Men’s Head Coach in October 2019.

“In any field, many people thrive on learning from their challenges. Success tastes better when people have managed to overcome obstacles. Though I have not really endured tougher challenges, I think my longevity in the sport has taught me to maneuver as a coach in bad and good times,” explains Mogudi.

Mogudi, besides having a CAF A and a SAFA Pro License Level 3 Coaching Licenses, has also completed a Electrical Engineering qualification at UJ. He also underwent training with the World Football Academy.

Mogudi says that has enjoyed sufficient support as a coach. He has set his eyes on developing players for future national teams. He says his contributions to South African football development may help the country win a FIFA World Cup in the long run.

“We need to entrench UJ Football as a force that that people fear when they face us in competitions. It has not been the case over the few years, but I think we are slowly edging closer to closing that gap. There is no better announcement like winning the Varsity Football tournament, now we are counted among the giants in university sport.

“I get motivated by seeing our achievements in the league. We are still leading the log this year and that is motivation enough to work even harder. The most important thing for me is to improve the individual players and that ultimately changes the quality of our team,” adds Mogudi.

Mogudi has his eyes set on doing well in the Federation of African University Sports (FASU) games and possibly win it to qualify for the International University Sports Federation (FISU) games. Additionally, the UJ football team will be working hard to ensure that they defend their 2021 Varsity Cup title when the 2022 Varsity Cup tournament starts in the middle of the year.

Mogudi says that the UJ Football team should play in the National First Division (NFD) or Premier Soccer League (PSL) in the future. This, he says, would be possible with the support of the University’s leadership. 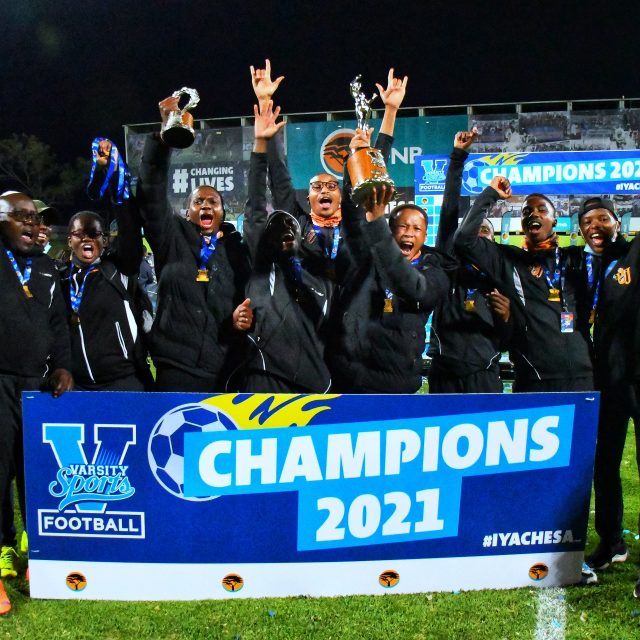