​​​The University of Johannesburg (UJ)’s Arts and Culture presented their RƎVO⅃UTION MMXIV programme, at the National Arts Festival in Grahamstowm (05 to 12 July, 2014) where What The Water Gave Me, received a SILVER Standard Bank Ovation Award.
What The Water Gave Me, by Rehane Abrahams and directed by Jade Bowers led UJ’s RƎVO⅃UTION programme, that featured an exhilarating line-up that included bold productions such as pppeeeaaaccceee by Darren O’Donnell and The Boy Who Walked IntoThe World by Robin Malan, at the National arts Festival.
In keeping with the celebratory spirit of 20 years of South African democracy, the RƎVO⅃UTION MMXIV programme is UJ Arts and Culture’s meditation on the ideas and ideals of freedom from a global perspective. “This multi-disciplinary, multi-faceted and multi-plural programme is an integrated arts articulation and iteration of the UJ Strategic Plan 2025 which has been curated in line with the guiding principles of UJ Advancement”, explains producer Grace Meadows.
What The Water Gave Me is an elemental exploration, which digs up gestures and stories that have been buried in the darkness of Cape Town’s history, this epic production features Cherae Halley in an electric solo performance. Flowing from lush stories of ancient majicks to gritty tales of urban terror, the play traces the stories of four characters: a hip-hop head from Heideveld who channels poetry from Sirius, an urban taxi time traveller whose body is the city she lives in, a child who is caught by the monster paedophile, and a storyteller who weaves their worlds together. Through the resources of imagination, the characters are able to transfigure their existing realities. Reviewing the production, which had its debut at the UJ Con Cowan Theatre earlier this year, Correy Sutherland commented that ‘this is one show that will make the festival worth the effort.’ He also called the production an ‘excellent show’ and ‘runaway success.
Festival Artistic Director, Ismail Mahomed named UJ Arts & Culture associate artiste, Jade Bowers, a “Rising Star” adding that “her productions What the water gave me on the Fringe and Salaam Stories on the Solo Season (Main Programme) are certain indicators that she is going to emerge as a strong force on the directing circuit.”.
Bowers is also an independent producer/director/designer in her own right under the banner of Jade Bowers Design & Management. 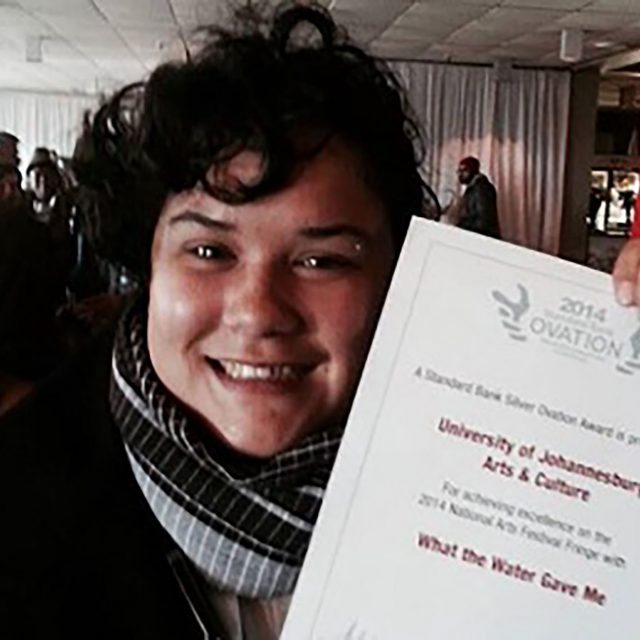