The University of Johannesburg’s (UJ) advance to global excellence and stature was evident with the Institution’s Vice-Chancellor and Principal, Prof Ihron Rensburg being awarded the University of South Carolina’s (USC) President’s Medal for outstanding service to higher education and scholarship. Prof Rensburg was instrumental in the transformation of the South African educational system post-apartheid.​​​ ​

​Before his tenure as Vice-Chancellor of UJ, Prof Rensburg was intimately involved in the transformational process, that saw a national system of 36 universities trimmed down to 23 through a series of institutional mergers, and separately, the trimming down of racially and ethnically divided public schooling systems, from 19, to 9 provincial operating and 1 national policy focused departments.​​​​

Under his leadership UJ is South Africa’s most successful university merger. The University tripled its research output and doubled its share of national research output to almost 8% in its nine years. UJ has also been ranked in the top 4% of universities globally by the QS ranking system for 2013 and 2014.​​​​

Prof Rensburg delivered the first in a series of USC lectures that highlights and promotes leadership on the international stage on Monday, 27 October 2014 in the USA.

Prof Rensburg reflected on the history and injustices of apartheid in South Africa and how various systems of racial segregation oppressed citizens for almost 50 years. He confirmed UJ’s commitment to bridge this gap by minimising the University drop-out rate, especially in light of the tectonic shifts in the profile of UJ’s student body. In his speech he elucidated how enhanced and elevated South African – US academic partnerships can contribute to restructure and revitalise SA education post-apartheid.

Describing UJ as an international university of choice anchored in Africa, which is determined to shape the future, Prof Rensburg stressed that he strongly believes in global engagement and partnerships.

“The University is honoured to partner with USC. We have forged an urgently constructed partnership that aims to make education more accessible for not only the people of South Africa, but also for Americans,” he said. “We believe that centres of excellence, such as USC, should take a lead in sharing intellectual capital and experience with peer institutions in the developing world that may not be as established, or well-endowed, but which have much to offer their First World counterparts,” he elaborated.

“This partnership is a joint acknowledgment of our new reality: we live in a global village and the challenges that we face in the developing world are equally challenges for the developed world. We are all linked by our common humanity and therefore our challenges are all shared challenges. We are confident that it is a partnership that will greatly benefit both institutions as relations in educational opportunities are greatly strengthened in the interest of all parties.”

Although the road to universal South African education will be difficult and progress slow, Prof Rensburg believes that the people of South Africa, especially university students, will meet their full global potential due to equal global partnerships. 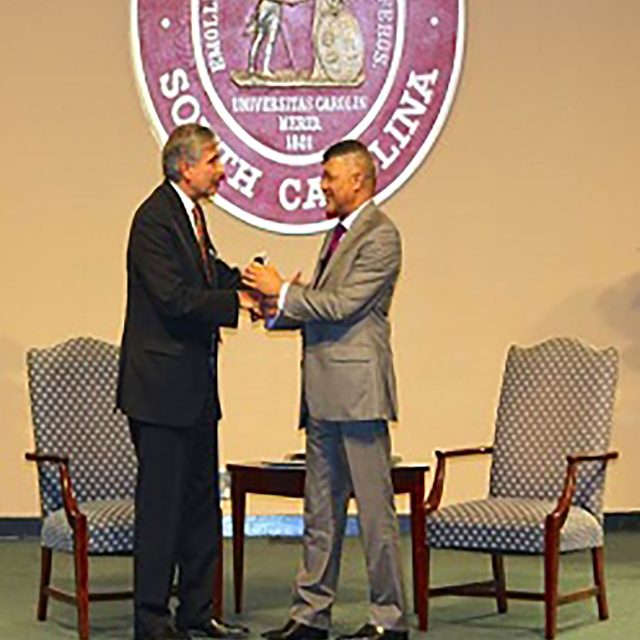