Six University of Johannesburg (UJ) student-athletes and Netball Club manager and coach, Bongiwe Msomi, were named as part of Team South Africa’s athletes headed to the 2022 Commonwealth Games in Birmingham. The South African Sports Confederation and Olympic Committee (SASCOC) made the announcement on Wednesday, 08 June 2022, just 50 days before the Games begin.

“We are very proud of our club members and wish them well,” said Lezanne Bruwer, Manager: UJ Sport for Students with Disabilities (SSD).

The Team SA announcement comes a day after Netball SA announced 24 players that, for the first time in the history of netball in South Africa, were offered professional contracts starting 0n 1 April 2022 to December 2023. Msomi, Mahloko and Reyneke were among the contracted players. Msomi is the SPAR Proteas captain and has represented the country on numerous occasions and was also appointed the World Netball Official Athlete Ambassador for the African Region ahead of the 2023 Netball World Cup.

UJ Sportswoman of the year and Master of Health Science, Chiropractic student and intern, Paton, was recently announced as part of the SA senior women’s hockey team that will participate in the 2022 FIH Women’s World Cup in July. Paton was part of the SA Women’s Hockey team that participated in the 2020 Tokyo Olympic Games and the 2022 AFCON Hockey Tournament in Ghana in January this year.

Brown is the UJ Sportsman of the year and plays for the SA rugby 7’s team.

Moganedi is no stranger to representing SA; she has previously donned the national colors at the recent Wheelchair Basketball Federation (IWBF) Afro World Championship qualifiers in January 2022. In March 2022, Moganedi was also selected as part of the IWBF Players Commission and will be participating in 3×3 wheelchair basketball.

“Anybody who brings a medal will be awarded, anybody who breaks a record will be awarded double. Enjoy Birmingham, but remember you must do the best that you can, and I want you to bring those medals. From the 37 that the team before you brought, you are bringing 37 times two,” said Nocawe Mafu, Deputy Minister of Sports, Recreation, Arts and Culture. 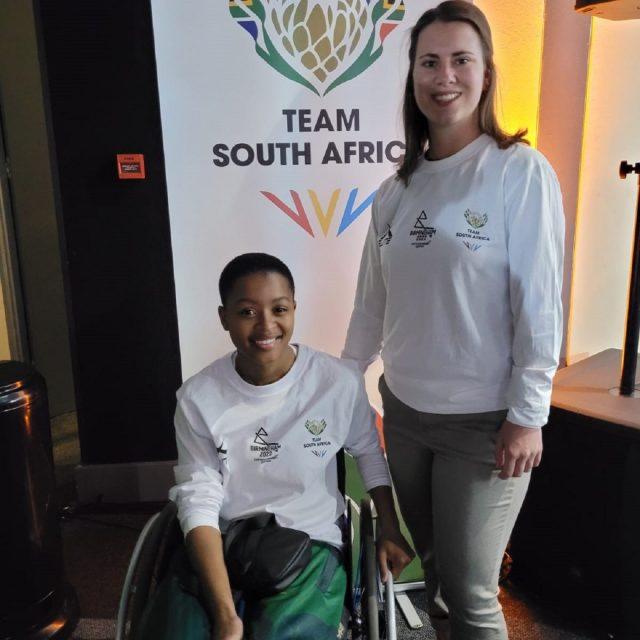