​​Three of the University of Johannesburg’s most promising young athletes have been selected for the South African squad to take part in the 12th CAA African Junior Athletics Championships from Thursday, 5 to Sunday, 8 March in Addis Ababa, Ethiopia.

First-year students, Wanzel Breytenbach, Johan Scholtz and Zinzi Chabangu, all aged 18, will aim to make an impact at the highest level when they represent their country on the international stage.

All eyes will be on South Africa’s number one ranked junior discus specialist, Scholtz, who will also be representing the country in the shot put competition.

Scholtz, a Business Management student, will be challenging his personal and season’s best throw of 56.76m in his signature event.

Although this will not be the first time that he will be participating in this competition, Scholtz said it was a privilege and an honour to represent the country and he hoped to be an ambassador for SA.

“I plan to achieve my highest potential. As an athlete, I have a lot of determination, self-discipline, ambition and physical strength. I believe I am in top form for this competition. I train with the discus for two to three hours a day and also in the gym,” he said.

Coach Pierre Blignaut said Scholtz had the potential to approach the 60m mark with the discus.

“He can do exceptionally well in this competition and has a very good chance of walking away with a gold medal,” said Blignaut.

Another of Blignaut’s protégés, shot-putter Breytenbach, who is also a former junior national champ, will be hoping to beat her personal best of 13.96m.

Breytenbach is a Hospitality Management student and has heaved a season’s best of 13.45m so far.

Blignaut, with whom she has been training for three years, said he had no doubt that the young athlete’s training would pay off in the international tournament.

Breytenbach said her form was improving every day and she could not wait to represent SA for the first time at the championships. “When you start doing sport, your dream is to represent your country and the feeling of me doing it is extremely exciting. The trust your sports federation has in you and the support of family and friends motivates you to go for gold,” she said.

Long jump and triple jump star Chabangu is aiming to beat her personal bests of 6.10m and 13.12m respectively. Chabangu holds the national triple jump record and ranked first in SA in both disciplines last year. The National Diploma student has ranked as high as 16th and 22nd in the world in her respective categories.

Her coaches, Maryna and Owen van Niekerk, who have guided the young athlete for the past four years, said they saw no need to push her and were certain she had the talent to become a stellar senior athlete.

“Zinzi is immensely talented and with the correct training and development will have a very successful athletics career,” said Maryna.

The 11th CAA African Junior Athletics Championships was hosted by Mauritius in 2013 and was dominated by athletes from Kenya, Nigeria and Ethiopia.

Athletes from over 30 African countries will participate in the 12th continental competition in Ethiopia this month.​​​ 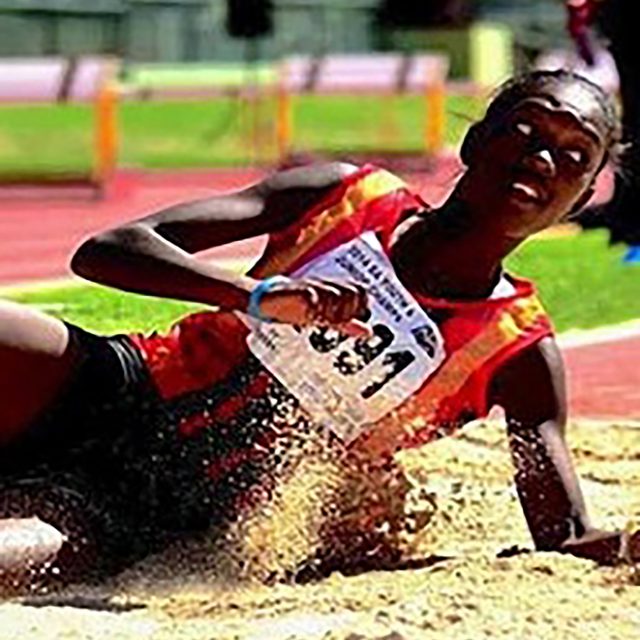