​”There is a lot of broader positive outcomes for South Africans to learn about Chinese culture and how to speak Mandarin,” says Prof Lyu Jiangao, the Co-Director of the Confucius Institute (CI) at the University of Johannesburg (UJ).

The mutual cooperation among the different countries will promote positive cultural exchanges for better understandings explains Prof Jiangao. “South Africans will get to know more about the Chinese unique culture of food, medicine, tea, Tai Chi, etc. Learning to speak Mandarin well will be helpful when traveling to China and for future job prospects and also to make business.”

Prof Jiangao, who joined UJ as the Co-Director of UJ Confucius Institute in November 2014 is also a Professor of Law from Nanjing Tech University.

In celebration of the Year of China in South Africa 2015 the University’s Confucius Institute aims to promote further expansion and deepening of existing political, economic, scientific, technological and cultural exchanges between the two countries. 2014 was South Africa’s Year in China.

To this end, the University’s Confucius Institute, in partnership with the Nanjing Charm: Traditional Chinese Culture Show, is hosting an art tour on Monday, 28 September 2015 at the Auckland Park Kingsway Campus.

“The art tour program will include the Chinese Peking Opera, Chinese Lion Dance, Chinese Dragon dance, traditional Chinese music instruments performance and Chinese Tai Chi. The performing delegation will consist of students and staff from Nanjing Tech University, sent by the Confucius Institute Headquarters,” said Prof Jiangao. “It is also a kind of cultural exchange between China and SA, and between UJ and Nanjing Tech University.”

Prof Jiangao’s work is to promote Mandarin language teaching and the Chinese cultural experience for UJ staff and students, the public, the business, and the government. In June 2015, Prof Jiangao led a delegation of UJ mandarin students to China on a cultural exchange excursion. The students visited the Great Wall of China, the Tiananmen Square, the Forbidden City, the Temple of Heaven, and the Confucius Institute Headquarters in Beijing. They also visited Nanjing Tech University (NTU) where they learned Mandarin, experienced Chinese calligraphy, Chinese Tai Chi, Chinese martial arts, Chinese magic, Chinese Traditional Han clothes, communicated with students from NTU as well as visited some cultural sites in Nanjing. All the students attended and passed the Hanyu Shuiping Kaoshi (HSK) and Youth Learner Test (YCT) organised by the Confucius Institute Headquarters (Hanban).

In September 2015, Prof Jiangao with UJ’s Faculty of Engineering and the Built Environment (FEBE) took another 40 UJ staff and students to visit Shanghai, the economic centre of China, and Nanjing. In Nanjing, they not only visited Nanjing Tech University and communicated with the staff and students from NTU Faculty of Civil Engineering, but also visited the cultural sites in Nanjing to further understand the culture of the city and China. In addition, UJ’s Confucius Institute organised their visit to the construction sites of Zendai Group which invested to build a mega-city in Johannesburg.

Prof Jiangao looks forward to academic research, public lectures, international conferences, and discipline construction. He believes that he will be able to promote further contact between UJ and Chinese communities in Johannesburg and the country.

In April 2015, the Institute brought the internationally acclaimed Tribute to Mandela’ Exhibition to South Africa as part of the Year of China in South Africa 2015.​

Part of the work also includes the implementation of different Confucius Institute Headquarters’ programmes, such as HSK Test, summer/winter camps to China, Chinese Bridge Competition, Scholarships, and Confucius China Studies Program. Also known as the Hanban, the Confucius Institute attaches great importance to the promotion of Chinese language throughout the world, viewing it as an important step to enhancing understanding and friendship, promoting economic and trade cooperation & developing scientific, technological, & cultural exchange. 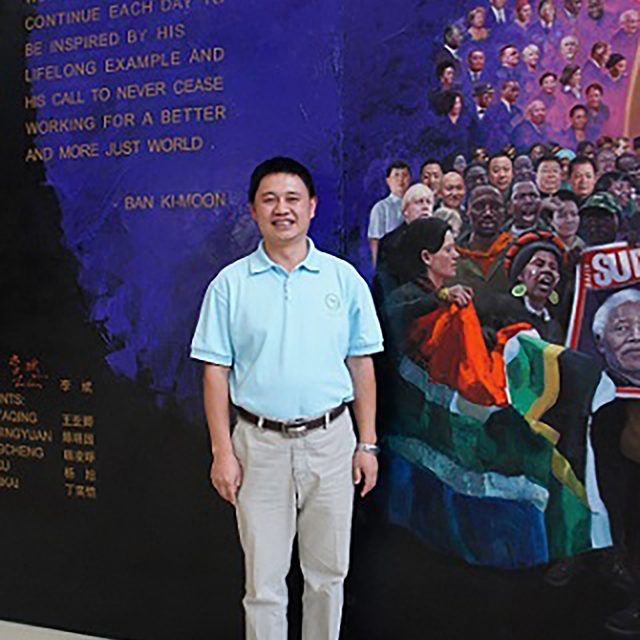