Two-times national table tennis champion, Danisha Patel, will be looking to turn the tables on her opponents when she represents South Africa at the African Games in Brazzaville, Congo, next month (4 to 19 September).

Patel is one of four table tennis players and the only UJ student selected for the prestigious continental games.

“This will be my first African Games. I’ve heard that it is one of the biggest tournaments in Africa, with many different sporting codes, and I’m excited to be representing SA,” says Patel.

The 22-year-old Lenasia resident is no stranger to international competitions, having participated in the World Student Games in Russia in 2013 and the ITTF African Championships in Egypt in January this year.

She successfully defended her national singles title this year and also scooped the silver medal in the mixed doubles category alongside fellow UJ student Chetan Nathoo.

Patel said her goal for the tournament would be to watch and learn from the other international players and gain experience. She says: “Our table tennis ladies’ team is one of the best I’ve seen and we hope to make it as far as possible.”

She says their strongest rivals would be Egypt, who counted current African champion Dina Meshref among their stars. “She’s an amazing player who is also left-handed like me and is awesome to watch. The international standard is very difficult to compete with as players are well trained with professional coaches,” she says.

Other teams to watch would be Nigeria, Tunisia and Algeria, says Patel.

“On weekends, I focus on physical fitness and during the holidays I play as much as I can.”

Now completing her final year studies, Patel said it was important for her to balance her academic commitments and training schedule. Her dedication to the sport has been constant since she and her brothers discovered a dusty old table tennis board at her grandfather’s house.

“He kept it on his roof and was about to throw it away but my brothers repaired it and took it hom​​e. Since then, we’ve been playing as a pastime,” she says.

Patel first turned out for her primary school and carried on playing throughout high school, taking on a professional coach in 2005 and making her junior national debut that same year.

Although 2016 is an Olympic year, Patel says that she still needed years of work to be ready for the global games.

She also says that table tennis in South Africa had grown by leaps and bounds over the past few years but that much development was still needed. She is doing her bit towards this goal as a coach at the Lenasia Table Tennis Association.

“The participants are mostly juniors from local primary and high schools. I assist with basic skills training; technique, movement and physical training to increase sports performance.”

Team SA will have representation in 15 of the 22 sporting codes at this year’s African Games.

The following UJ athletes and alumni athletes are included in Team SA to African Games: 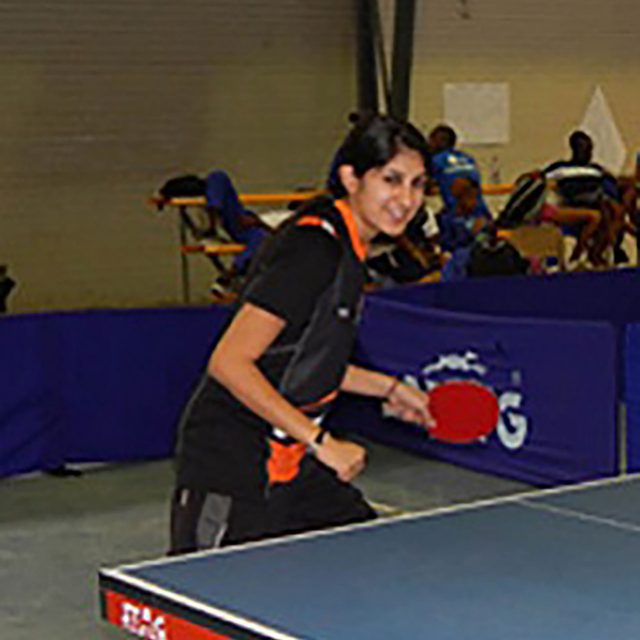