T​he University of Johannesburg (UJ)’s brand has, once again, received international acclaim with its brand and marketing campaign being named as one of the best advertising campaigns in the international business and higher education arenas.
​The International Association of Business Communicators (IABC), one of the world’s largest communication associations, has awarded the University’s ‘Be CLEAR about your future’ campaign an international Gold Quill Excellence Award as well as the Africa Gold Quill award for its 2012/3 advertising campaign.
“Winning a Gold Quill Award puts you in the top ranks of the world’s business communicators. You deserve to give yourself and your team or colleagues a pat on the back,” said Tim Buckley, IABC 2013 Gold Quill Awards chair.
Furthermore, UJ’s ‘Be CLEAR about your future’ campaign also received a Bronze award in the 2013 Council for Advancement and Support of Education (CASE) Circle of Excellence Awards, which recognises excellence among higher education institutions. This is the third year that the University of Johannesburg has been acknowledged by CASE. In 2011, UJ received a Gold award, and in 2012 Silver and Bronze awards for its advertising campaigns. Judges for the CASE award said: “Incredibly ambitious campaign with a lot of heart and soul poured into the overall execution and planning.’​
​
The ‘Be CLEAR about your future’ campaign is part of the brand development campaign that continues to build on the stature of the University while simultaneously speaking to the youth. The evolution of the brand development campaign focuses on presenting UJ as accessible yet providing excellence in teaching and learning, research and student experience. This award-winning campaign aimed to address a national problem: the lack of understanding among potential students about the process required to become a university student. It therefore addressed the dire need for early student career counselling.
UJ migrated from the 2011 “Be Anything You Want to Be” campaign to 2012’s “Be CLEAR about your future – Be Anything You Want To Be”. “CLEAR” is an acronym for: Choose your subjects wisely in grade 9; Learn well in grade 10; Earn the good marks you need in grade 11; Apply early with those marks in grade 12; and Register for your first year at UJ if you are accepted.
Judges of the Gold Quill award commented as follows: “This was really outstanding work. You adhered to many communications best practices – you identified and understood your audiences, you identified broader community communications needs as well as your university’s desire to ensure the safety and education of those audiences, you set up SMART goals and objectives, and you provided a nice selection of work samples. Congratulations!”
“The University is thrilled to have made its mark in the international marketing and communication arena. Winning the international as well as the Africa IABC Gold Quill Award and being honoured with a CASE award, not only puts the University in the top ranks of world-class business communicators but also reinforces the University’s bold vision to become ‘An international university of choice, anchored in Africa, dynamically shaping the future.’,” says Ms Lesmarie Bentley-Steyn, Senior Manager of Marketing and Brand at UJ, who recently accepted the award at a gala dinner event held in New York.​​ 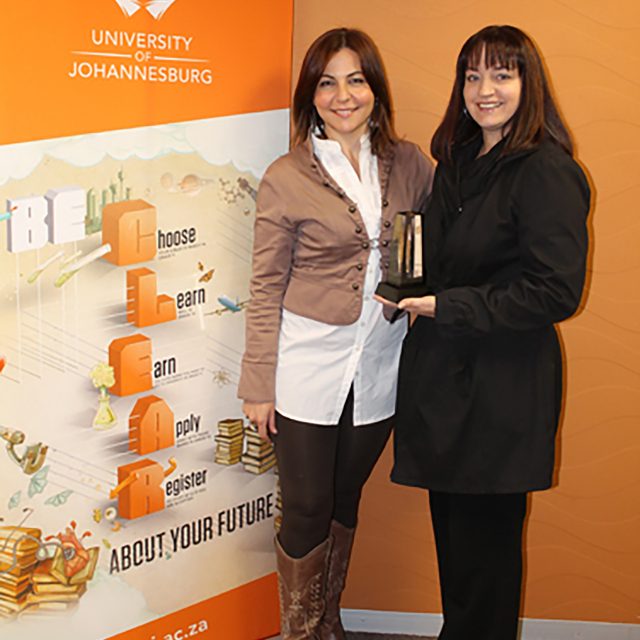