​​The University of Johannesburg (UJ) officially marked the beginning of its 10th academic year at the Ellis Park Arena today, 31 January 2014. Despite the pouring rain, UJ students and parents as well as staff members attended the event, welcoming first-year students to the University.
As is tradition, various University residences echoed their residence war cries in the Arena – a show of respect and honour for academic excellence. Further, a top achieving student for his three years of undergraduate study at the University, Mr Cheick Kader Toure shared with the new students his inspiring recipe for success.
“Passion and hard work are the driving force in academic excellence. Also, it is important that working hard and not taking time off is not good practice. I relax a lot after a long day of hard work. When you have passion for what you study or do, you emerge triumphant,” said Toure, a UJ international student from Code D’Ivoire who received an average pass of 93% for his three years of study at UJ.
Professor Ihron Rensburg, UJ Vice-Chancellor and Principal, highlighted the University’s achievements since its formation ten years ago. He shared with students, parents and the UJ staff UJ’s achievement of being ranked in the 4% of best universities globally and the University being listed amongst the 28 best research universities worldwide in the consortium Universitas 21.
Prof Rensburg shared with the UJ community the efforts the University is making in building a better society for humanity. “At the apex of the deepening and elevation of our academic reputation and stature, the Institute for Advanced Studies in Science and Society will be launched later this year, which is a joint Africa-Asia intellectual project, with our partner, the Nanyang Technological Institute of Singapore.
“These and other efforts; such as the modernisation of our libraries; and teaching and learning through the use of modern technologies including the use of the tablet/notebook. We are extremely grateful to Apple for its generous contribution to this work, and for establishing on iTunes SA the first Africa university teaching and learning portal which will result in a significantly enhanced academic experience for our under and post-graduate students and staff. It will also enable a significantly enhanced interaction and collaboration with leading scholars and students from across the world,” he said.
The Vice-Chancellor encouraged the students to seize the opportunity of being a UJ student. “To appreciate the nature of your privilege and opportunity, consider that in its last census, Statistics SA showed that there are 3.4 million young South Africans, aged 15 to 24, who are not in employment, not in education and not in training – roughly 32.9% of persons in your age group.
“Having worked your way up to this juncture in your life, you must now proceed to prove yourself by making a resounding success of your studies. This will not be easy; however with your efforts and our support, I can assure you that you will succeed beyond your expectations. Consider simply the example of your University, and its progress over the last 8 years: considerable effort with many lows along the way has resulted in it becoming not only a leader in SA but it is now counted among the very best universities on our planet.
“In becoming part of UJ’s just under 49,000 students – 2 500 of whom are international and 7 300 postgraduate – you have not only made a wise choice about your study destination. You are also positioning yourselves for future leadership because UJ graduates are making their mark as leaders in many fields in South Africa, on our continent and further afield.
“You now have the responsibility to match the global excellence of UJ with your own excellence. I have no doubt that each and every one of you has what it takes to succeed at UJ, and perhaps even more importantly, to succeed in life,” said Professor Rensburg.
At the opening, Mr Godfrey Helani, Director: UJ Student Life and Governance announced residences that performed welln in the 2013 academic year. Hector Petersen was the best performing residence on Soweto Campus, Aurum took the lead on the Doornfontein Campus, Benjemijn emerged tops on the Auckland Park Kingsway Campus, while Panorama was leading the Auckland Park Bunting Road Campus residences. The overall winner amongst all UJ residences was Benjemijn. The most improved residence was Sievebeeck.​ 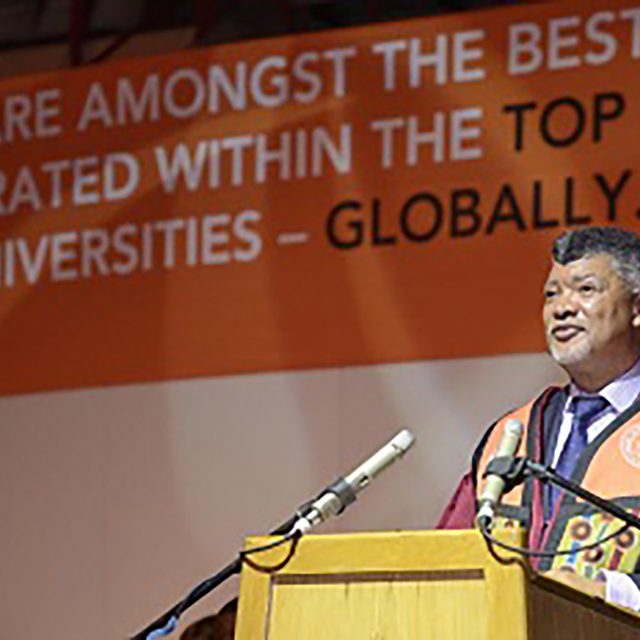