​​​A Nigerian uncle’s insistence on solving a ‘real African problem’ finally convinced four students at the University of Johannesburg (UJ) to tackle tender corruption with technology. The software application they developed on Tuesday 26 April won the ‘World Citizenship’ category of the South African leg of a global student software development challenge, the 2016 Microsoft Imagine Cup.​

The four, all Honours students at the UJ Academy of Computer Science and Software Engineering (ACSSE), hail from South Africa, Zimbabwe and Nigeria. Their ACSSE mentor was Mr Kevin Downs.

Says team leader Mr Chukwudi Obodoekwe, from Anambra State in Nigeria:”The drive to design this system initially came from Mr Timothy Ikegwu who is my uncle and guardian. When he heard we are entering for the challenge, he said ‘Government in Africa is bad. You young people are bright. So find a real problem, like tender corruption, and fix it.’ It wasn’t easy, but he convinced us to go for a tender management development project.

“We believe the diversity of the our team played a major role in the success of the project. We are four student from three different African countries but we found out that we faced the same problem in terms of tender corruption,” says Obodoekwe.

Key to their approach was integrating tender management processes in one system, from ‘cradle to grave’. Their ‘Kriterion’ project spans the advertising of tenders, through to the evaluation of bids using the complex criteria in algorithms published by the South African Government, to the awarding of tenders and post-project or post-milestone delivery ratings.

In addition, they built in a critical ‘reality-check’ feature: Industry experts (Subject Matter Experts) can submit estimates of what a realistic bid for a tender should amount to. In this way, tender bids upwards of R20-million for a project that industry experts estimate should cost no more than R10-million, for example, can be identified.

Lastly, the Kriterion project added a layer of ‘triple-blind’ functionality: the bidders on tenders, the industry experts and the Government officials are all completely anonymous to each other on the system, to reduce influencing of the tender award process.

The team used Microsoft Visual C# for the backend, Microsoft SQL for the database communication, Angular JS and HTML for the front end and SignalR for the real-time updates of a chat forum for each tender project. The mobile application was developed on the Android platform.

“We wanted to do something different and make a small impact in society. People talk about making changes, or just criticise the government, but you need to ask what role you play in making the country better. We believe that a change can start from individuals. That’s why we identified the need to address problems with tenders and procurement systems. If this is implemented we believe it can go a long way to curb tender corruption,” says Obodoekwe.

Also on 26 April, a project aimed at assisting fraud investigators won the Innovation category of the challenge. Mr Rhyno Heydenrych, an Honours student at the ACSSE, specialises in digital forensics, where he analyses mobile phone and computer data related to commercial fraud investigations.

“Sometimes I go with the fraud investigators when they interview persons of interest. They interview both people who report possible fraud and people suspected of acting fraudulently. It struck me that there may be a way of recording the interviews and getting more insight into the answers than we currently do,” says Heydenrych.​

Heydenrych’s project ‘VSA_Forensic’ records a human voice at high quality on a laptop, analyses the voice recording using a variety of algorithms he found in published academic research, and displays a user-friendly graph indicating tension and anxiety levels.

Polygraphs, or lie detectors, are highly complex to operate, he says. Meanwhile, voice stress analysis, which looks at emotion and stress in a voice, is not a new concept, and there is a lot of published research about it.

“Polygraph data or voice stress analysis is not accepted in a court of law as evidence. However, if a fraud investigator, or a policeman questioning a possibly drunk driver or a person conducting a job interview can have additional information indicating that the person they question is getting more stressed, that can assist in interviews.

“VSA_Forensic cannot be used by itself to determine if someone is telling the truth, it merely presents the indicators and the investigator then needs to interpret the data along with the context. However, the analysis can help an investigator to know they are on the right track with their questioning,” he says.

Mr Frans Blauw, lecturer at the UJ ACSSE, and coordinator of student teams for the challenge, says “From here, these two teams will compete in their respective categories at the regional semi-final in the MEA region during May, each for a chance to participate at the World Wide finals in Redmond in July.
“We are very proud of all that our students have achieved by winning the final round of the Microsoft Imagine Cup South Africa. With 75 teams entered from all over the country, it is no mean feat. The fact that the ACSSE was able to snatch two categories this year shows the hard work and dedication that our students put into their projects, some of whom work full-time.

“At the Academy we teach a technology-agnostic approach to Software Engineering where it is the basic design principles that matter and those can be applied to any relevant technology. This allows our students to grow with technology that is increasing at an exponential rate.” 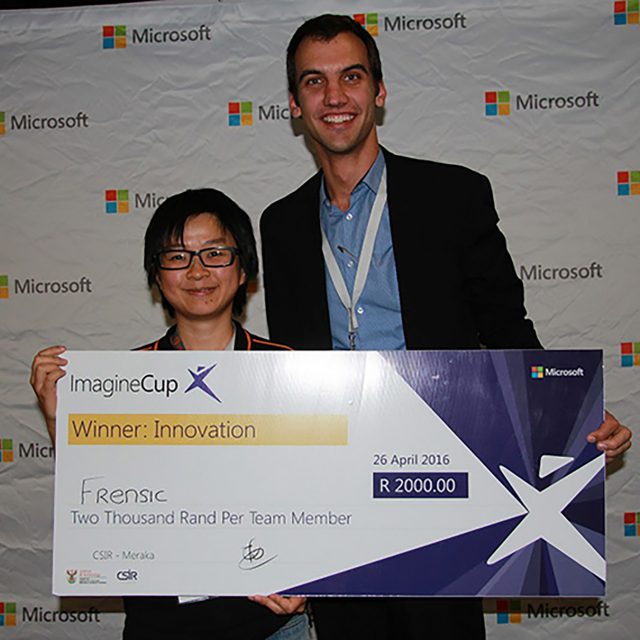