UJ students happy to be back on campus

First Year Seminar (FYP) marshall Sesona Betana has been spending the last week making sure first and second year students know exactly where to go when entering the APB campus.

While he spent the last two years learning online, he is still very familiar with the Doornfontein campus.

The fourth year Analytical Chemistry student appreciated learning online because it helped him to become more responsible for his own work.

“I actually prefer studying remotely. It’s actually quite tough being back at school because I am just not used to it anymore. It’s been fun seeing people though.”

He said he was still adjusting to being back on campus, sitting in the classes with the lecturers and actually having to write exams on campus.

“I think I will figure it out as I go along, it’s been so long but I will adjust eventually.”

As he dives into his final year, Betana is planning on coming back to UJ to study again in the future.

For the 21-year-old, coming to study at UJ was the perfect choice for him.

“The lecturers  know exactly what they are doing, the course is informative and the environment is lively. I love learning so this is a good place to be.”

As a FYP marshall he wants to ensure first year students can get around the campus and not be afraid of the university lifestyle.

“The struggle of first year is hard because you really don’t know anything when you arrive here. Even for the second years, they are still navigating the campus. So our job is to help make that easier for them and point them in the right direction,” he said.

Noluthando Ndebele,19, is experiencing a number of firsts. It’s her first time living in Gauteng permanently and studying a different course to what she initially wanted to do. She is also a first year student at UJ.

“The first week was hard and I really had to adapt being from KwaZulu-Natal. But I am ok now because I know the venues and can find my way around.

“I actually wanted to do Optometry, but I am doing Environmental Health now and I am surprised just how much I like it. The modules link with my previous work in high school so I am adjusting well.”

While she is still sorting through some NSFAS and bursary administration, she is making sure she enjoys herself and gets to know new people.

“I think I really just need to focus on my studies and do the best I can to have a great year.”

Katja Radel is a second year Sports and Exercise Science student. Now that the first week of university is done, Radel is making sure she is ready to take on the year.

“It was a bit stressful in the beginning, even socially getting to meet new people and adjusting to everything and meeting the lecturers. Actually, going to class and having to get up early, and getting here on time has been stressful but I think we will get used to it as we go along in the year.”

Radel said she felt like she was doing her first year again because it was the first time on campus this year.

“We didn’t know the people last year so now coming back and meeting everybody has been very different. I prefer being on campus, it’s nicer to have interactions and know what it’s all about instead of sitting at home looking at the walls and doing the same things everyday.”

The 20-year-old has found being at UJ homely as her sister also attends the university.

“It’s made things easier with getting to campus, and going back home as well and all those things.”

Humairaa Mahomed, 19, took a gap year last year and has been on the UJ campus just under a week.

“Seeing people on campus is a big change because I was at home most of last year. So for now to be with people, I need to settle in more but for now it’s been fine.”

The Sports Science student is looking forward to the year ahead and ready to meet new friends.

“UJ offers the best school for Sports Sciences and allows me to be close to home.”

Maanda Muvhali had part time lessons on campus while studying online but she is happy to be back full time.

“I prefer being back on campus because last year we were doing classes online and we came to write on campus, so that was a bit difficult but now that we are back on campus full time it’s great.”

The Complementary Medicine student said she and her peers have adjusted well to being back at the university. She plans on focusing her efforts this year so she can one day open her own practice.

“UJ had the perfect course for me and I plan on taking charge in the holistic industry,” said the 23-year-old. 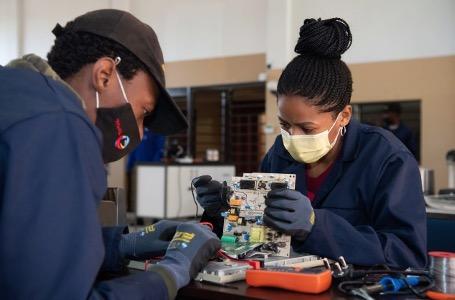