Sino-African relations have grown in leaps and bounds over the last decades as China has emerged as the second largest economy in the world. This was the sentiment of Prof Ihron Rensburg, Vice-Chancellor and Principal of the University of Johannesburg (UJ), on Thursday, 28 January 2016.

​Speaking at the official launch of the University’s Confucius Institute, Prof Rensburg pointed out that over the past four years, China has become South Africa’s most significant trading partner in terms of both exports and imports. “Equally, the strategic partnership has reflected efforts to strengthen South-South relations between China, the world’s largest developing nation, and Africa which has the highest concentration of developing nations.”

“The Africa-China relationship goes far beyond the political into the economical arena. Exploring the work already taking place at the University, UJCI seeks to uncover the extent to which the continent can benefit and learn from China in Africa’s development,” said Dr Monyae.

Dr Monyae echoed Prof Rensburg’s sentiments adding that China has become an important partner to South Africa. As a result it has become important for many South Africans from different spheres to learn to speak, read and write Mandarin. “The UJCI will be offering Mandarin on different proficiency levels. Contact with Chinese colleagues, however, extends beyond language, and an understanding of Chinese culture is essential,” said Dr Monyae.

Besides teaching mandarin language, UJ and its partner university, Nanjing Technological University, will explore giving effect to the existing MoU signed in 2014. This will consist of rigorous academic research and advisory inputs such as an exchange programme; student and staff collaboration between the two institutions; seminars; cultural events; conferences; increased publication in accredited journals; and expansion of these activities involving all academic faculties.

“Being able to communicate in Mandarin will open up opportunities for students to study in China and will enable smoother communication between South African citizens and the Chinese.” Dr Monyae stressed that the Institute will assist Chinese companies to enhance their footprint on the continent.

UJCI already assists students who are learning to speak Mandarin and who participate in practical higher education and cultural programmes in China. In 2015, the Institute’s Co-Director Prof Lyu Jiangao, a Professor of Law from Nanjing Tech University, led two sets of UJ students and staff on a cultural exchange excursion to China.

UJ is one of five universities hosting a Confucius Institute in South Africa. 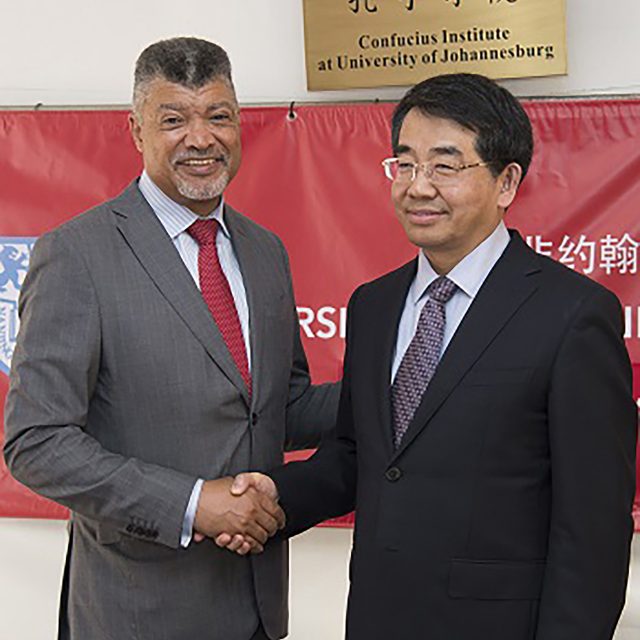