On Friday, 16 August, the University of Johannesburg (UJ) Solar hosted its first open day and the official launch of the society on the Kingsway Campus. The event was held in the exhibition area at the Student Centre, and attendees were given an opportunity to register as members of the society.​
​The UJ Solar Society provides a platform where students can get involved in the UJ Energy Movement. The programme at UJ promotes research, education and industry participation on alternative energy issues. “South Africa is well positioned to become a world leader in alternative energy applications. In order to realise this potential, energy innovation must be promoted through technology development and commercialisation”, says Prof Willem Clarke, CEO of Resolution Circle. “The UJ Energy Movement provides a platform to develop a skills base focused on energy innovation, while creating an environment favourable for industry collaboration.”​
The programme is driven through the joint efforts of the Electrical & Electronic and the Mechanical Engineering Science Departments, along with Resolution Circle at UJ. Resolution Circle is a training, research and development ecosystem that designs innovative, commercial, technology-focused solutions for industry in partnership with the university.
UJ’s involvement in alternative energy vehicles began in 2010 when they competed in their first South African Solar Challenge with a hybrid vehicle which finished first in its class. In 2011, the project was expanded to include three new three-wheeled vehicles (2 hybrids, 1 solar). In 2012, a new solar vehicle, Ilanga I.I was designed and manufactured to compete in the Olympia class of the 2012 Sasol Solar Challenge. Despite the challenges that were faced by the team in the 2012 challenge, Ilanga I.I placed second in the Olympia class, with the hybrid vehicles taking first and third place in the Technology Demonstration class. Additionally, the University received the Technology Innovation Award in recognition for their commitment to support energy efficient vehicles by entering three vehicles (one solar and two hybrids) in the challenge.
The UJ Solar Society was established to take advantage of student participation beyond the Faculty of Engineering and the Built Environment. The society organises students from different faculties to support the objectives of the programme and to encourage participation outside the engineering curriculum.
Students participating in the programme are also expected to participate in the community outreach programme, hosting and visiting schools, presenting the efforts of the UJ Energy Movement at science fairs, trade shows and exhibitions. It is estimated that the UJ Energy Movement has reached over 180 000 people through more than 18 school visits and 17 exhibitions, including the National Science Week, Eskom Innovation Summit, UJ Open Days, and the South African Solar Challenge and the Sasol Techno-Ex.
In an on-going effort to promote science, engineering and technology to the South African youth, the UJ Solar Team will be donating their first prototype vehicle, Ilanga I, to the Deutsche Schule Johannesburg (DSJ), the only school entry in the 2012 Sasol Solar Challenge. Ilanga I (isiZulu for sun) is a three-wheeled solar-powered vehicle that was initially built to compete in the 2012 Sasol Solar Challenge. 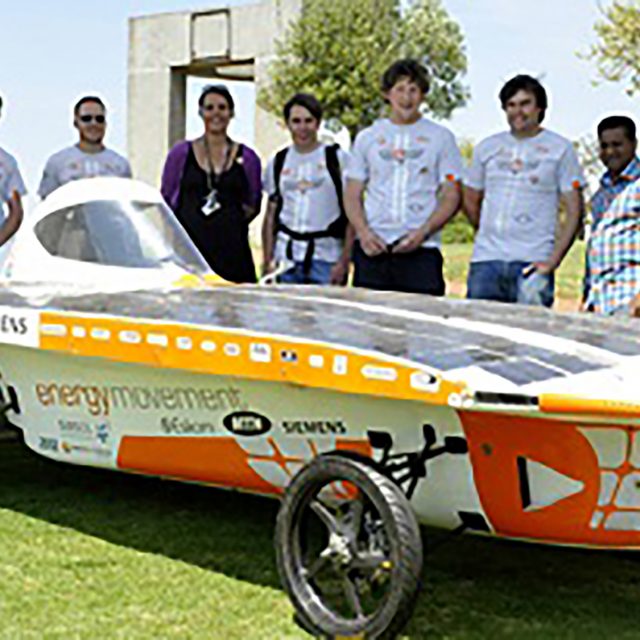