​A new family of potential silver-based anti-cancer drugs has been discovered by researchers at the University of Johannesburg (UJ). The most promising complex among these has been successfully tested in rats and in several human cancer cell lines in laboratory studies. The complex is as effective against human esophageal cancer cells, as a widely-used chemotherapy drug, but at a ten times lower dose, and much lower toxicity against non-malignant cells.

“The UJ3 complex is as effective as the industry-standard drug Cisplatin in killing cancer cells in laboratory tests done on human breast cancer and melanoma, a very dangerous form of skin cancer, as well,” says Professor Marianne Cronjé, Head of the Department of Biochemistry at the University of Johannesburg.

“However, UJ3 requires a 10 times lower dose to kill cancer cells. It also focuses more narrowly on cancer cells, so that far fewer healthy cells are killed,” she says.

Apart from needing a much lower dose than an industry standard, UJ3 is also much less toxic.

“In rat studies, we see that up to 3 grams of UJ3 can be tolerated per 1 kilogram of bodyweight. This makes UJ3 and other silver phosphine complexes we have tested about as toxic as Vitamin C,” says Professor Reinout Meijboom, Head of the Department of Chemistry at the University of Johannesburg.

If UJ3 becomes a chemotherapy drug in future, the lower dose required, lower toxicity and greater focus on cancer cells will mean fewer side effects from cancer treatment.

UJ3 appears to target the mitochondria, resulting in programmed cell death to kill cancer cells – a process called apoptosis. When a cancer cell dies by apoptosis, the result is a neat and tidy process where the dead cell’s remains are “recycled”, not contaminating healthy cells around them, and not inducing inflammation.

Certain existing chemotherapy drugs are designed to induce apoptosis, rather than “septic” cell death which is called necrosis, for this reason.

UJ3 targets this need for energy, by shutting down the “powerhouses” of a cancer cell, the mitochondria. The complex then causes the release of the “executioner” protein, an enzyme called caspase-3, which goes to work to dismantle the cell’s command centre and structural supports, cutting it up for recycling in the last stages of apoptosis.

UJ3 complex and the others in the family are based on silver. This makes the starter materials for synthesizing the complex far more economical than a number of industry-standard chemotherapy drugs based on platinum.

“These complexes can be synthesized with standard laboratory equipment, which shows good potential for large scale manufacture. The family of silver thiocyanate phosphine compounds is very large. We were very fortunate to test UJ3, with is unusually ‘flat’ chemical structure, early on in our exploration of this chemical family for cancer treatment,” says Prof Meijboom.

Research on UJ3 and other silver thiocyanate phosphine complexes at the University is ongoing. 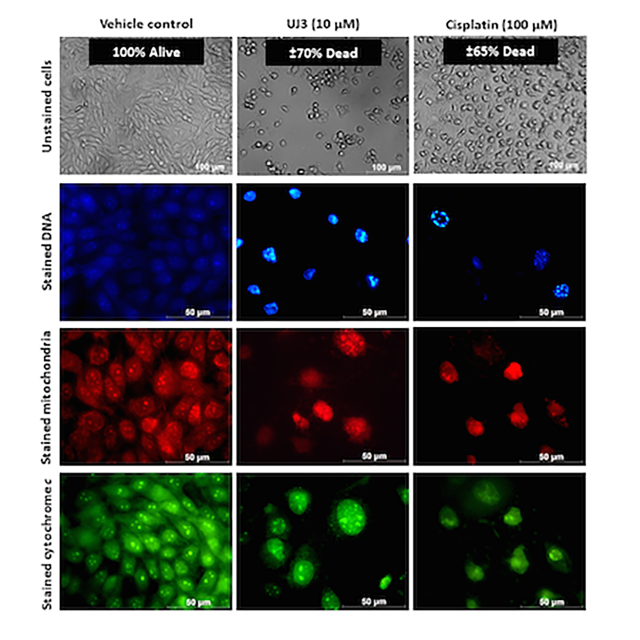