According to the latest Quacuarelli Symonds World University Rankings, the University of Johannesburg (UJ) has not only held on to its place among the top 4 per cent of universities globally, but it is also continuing to rise in various key fronts that make up the criteria for such rankings. It is therefore only fitting that a research team from UJ’s Department of Information and Knowledge Management (IKM) will soon rise to the very top of the African continent.​

Mount Kilimanjaro is not only home to the highest point in Africa but it is also the highest free-standing mountain in the world. It is said that walking from its base to its summit is like walking from the equator to the arctic in less than a week. Although the various routes up this mountain is not as technically demanding as others of its size, reaching the summit at 5895m above sea level is no easy task. The lack of oxygen and extreme temperatures at these altitudes force an estimated 30 per cent of climbers to turn around before ever having reached the top.

According to data released by Tanzania National Parks, the 2011/2012 season saw a record amount of 57,456 tourists visit Kilimanjaro National Park. An average of 45 climbers attempt the strenuous hike up this dormant volcano on the northern edge of Tanzania each day, relying on teams of porters and guides to safely get them and their equipment up and down the mountain. Due to reports that the permanent glaciers on the mountain will have completely disappeared between 2022 and 2033, the number of climbers will likely increase over the coming years, with them hoping to glimpse the rare occurrence of ice on the equator before it is gone.

Prof Tanya du Plessis, lecturer and post-graduate research supervisor at IKM, UJ, is conducting research on the relationship between the parties involved in the Kilimanjaro Trek value chain, namely clients attempting the summit, porters, guides, park rangers, trek outfitters, and the tour operator or travel company. Her argument is that Corporate Social Investment, if applied correctly, can benefit all of the above mentioned parties by being a Competitiveness Accelerator.

Prof Du Plessis’s research is to allow for increased regulation on all aspects of this intricate system of support. Of particular interest is how porters, who in most cases rely on tips from clients as their only source of payment, are supported on and off the mountain.

From 5 to 11 October, Prof Du Plessis, having summited Kilimanjaro three times, will once again scale this lone giant. With each expedition more knowledge is being gathered by conducting in-depth interviews with all concerned parties. The focus for this year’s climb will be on clients that hike up the mountain as well as tour operators that are responsible for most of the logistical arrangement for their clients’ summit attempts.​

​Supporting Prof Du Plessis as research assistants are two UJ alumni, Mr Molefe Ratsoana and Ms Khutso Maahlo, both of whom have graduated as IKM Honours students. Ms Andrea Potgieter and Ms Tracy Lefika, both IKM lecturers at UJ, will join the expedition after presenting research papers together with Prof Du Plessis at the International Conference on Contract Farming in Africa (POLICOFA) that takes place in Dar Es Salaam on 2-3 October 2014. The University’s in-house photographer, Mr Jan Potgieter, will document the expedition. Mr Rudi Feiertag and Ms Celeste van der Walt will attend in their own capacity. 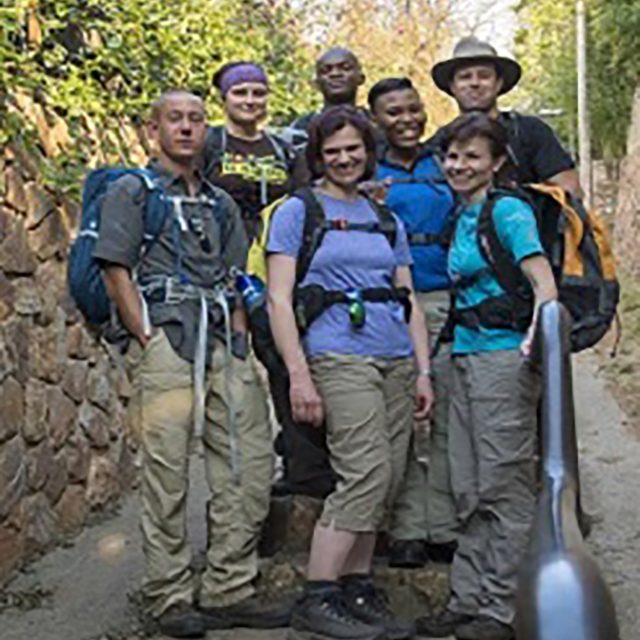