“We want to give the public an opportunity to hear the case for the Marikana Report to be released to the public. The President will have to respond to the commission’s recommendations, and can do so in his own time. There is much interest in findings on an event that occurred 31 months ago, and members of the public should have a chance to consider the merits of the report as soon as possible. Police violence will not stop until those responsible for the massacre are held to account.” This is the message by Prof Peter Alexander, South African Research Chair in Social Change at the University of Johannesburg (UJ).​​​

Given the ongoing problems of police violence, as well as mounting evidence suggesting that the intelligence capacities of the state are being misused to spy on civil society and political critics on the most dubious of grounds, the South African Chair for Social Change will host a public meeting with leaders of the Economic Freedom Fighters (EFF), the United Front (UF), the Marikana Solidarity Campaign (MSC) and the Right 2 Know Campaign (R2KC) as a call for human rights and an end to police violence on the eve of Human Rights Day, Friday 20 March 2015.

The discussants joining the platform include: member of the UF’s National Working Committee and former Intelligence Minister, Ronnie Kasrils; Advocate for Marikana workers at the Farlam Commission and Chairperson of the EFF, Dali Mpofu; R2K Campaign and Thembelihle Crisis Committee leader, Bhayiza Miya and UJ researcher and MSC activist, Trevor Ngwane. Thembelihle was the site of recent protests, resulting in arrests.

Jane Duncan, a Professor of Journalism at UJ and a fellow organiser, added: “The meeting is part of a number of events marking Human Rights Day. There is much concern about Marikana, but also about police killings elsewhere. These are part of a broader process of securitisation, which we can see in the eviction of MPs from parliament, in speeches by the President and Minister of Finance that foreshadowed a massive increase in spending on the Public Order Police, and in revelations about spying on civil society activists.”

The media is invited to attend a public meeting with strong political advocacy, grounded in scholarship.

The public meeting, at the Council Chamber, Madibeng Building, Auckland Park, Kingsway Campus, is scheduled to start at 15:00.

*The report is due to be submitted to President Zuma before the end of March.

*The public meeting is organised by academics at the University of Johannesburg and supported by the Marikana Solidarity Campaign and the Right to Know Campaign.​ 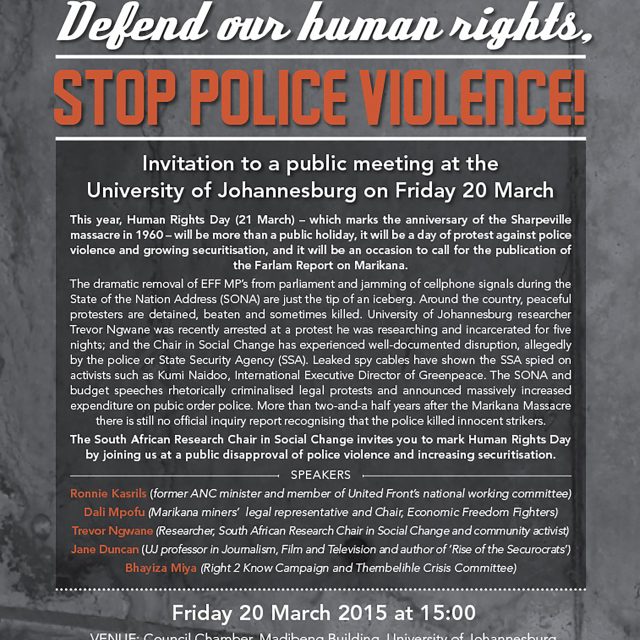