​Professorial Inaugural address: Prof Steven Karataglidis
Steven Karataglidis, a Professor in the Department of Physics at the University of Johannesburg (UJ), will deliver his inaugural address with the theme, A retrospective of nuclear physics, in theory, in the the Council Chambers, Madibeng Building, Auckland Park Kingsway Campus on Tuesday, 15 July at 18:00.
Professor Karataglidis received his PhD in Theoretical Nuclear Physics at the University of Melbourne, Australia, in 1995, with a thesis entitled “Large scale shell model analyses of complementary nuclear reactions”, concentrating on the area of overlap between nuclear structure and reaction theory, in particular, developing what has become known as the Melbourne g-folding model of nucleon-nucleus interactions. He did his undergraduate and Master’s degrees at the University of Melbourne, the latter in Experimental Nuclear Physics. During his PhD, he also completed an Associate Diploma in Piano from the Australian Music Examinations Board, and was co-host and physics reporter for a popular science radio show in Melbourne.
After he completed his PhD, Prof Karataglidis went to the National Superconducting Cyclotron Laboratory at Michigan State University in the USA for his first postdoctoral fellowship. It was here that his interest in exotic nuclei began, and, in particular, the many-body descriptions of halo nuclei. Postdoctoral fellowships at TRIUMF, Canada, and the Los Alamos National Laboratory, USA, followed. After LANL, Prof Karataglidis spent a year as a Visiting Staff Member in the Nuclear Theory Group at the CEA/Bruyeres-le-Chatel, France. Following that year, Prof Karataglidis moved back to Melbourne, as a Research Fellow of the School of Physics, University of Melbourne, for two and a half years.
In mid-2006, Prof Karataglidis joined the Faculty at the Department of Physics and Electronics at Rhodes University, as a Senior Lecturer. He was promoted to Associate Lecturer in 2008, and became Head of the Department in 2009. In April 2010, he joined the Faculty of Science’s Department of Physics at the University of Johannesburg.
From 2006, Prof Karataglidis has been the Head of the Theory Division of the South Africa-CERN Programme, which is dedicated to Nuclear and Particle Physics research, both experimental and theoretical, at CERN, and is one of the Programme’s founding members. He also served on the Programme Advisory Committee of iThemba Labs (Faure) from 2007 to 2011, serving as Chair of that Committee from 2008. He has served, and continues to serve, on many panels, at the highest level, at the National Research Foundation.
With almost 80 research articles to his name, Prof Karataglidis’ work continues on the interplay between nuclear structure and nuclear reaction theory, with particular emphasis on the structures of exotic nuclei, and how one may obtain information on such at the microscopic level from nuclear reactions. He is involved in research collaborations, both experimental and theoretical, from the world over, particularly from Australia (The University of Melbourne), Japan (RIKEN and Tohoku University), and France (CEA/Saclay). Most importantly, he is part of the MCAS collaboration, which has representatives from Australia, Canada, and Italy.
Abstract of the inaugural address by Steven Karataglidis:
A retrospective of nuclear physics, in theory
The underlying problem of all Nuclear Physics, apart from the stigma it sometimes attracts, is that it is impossible to understand in its entirety. At its base lies the many-body problem, which is the study of the dynamics of a bound system of more than two particles.
The study of the solar system, strictly speaking, is an example of this, but the dominance of the mass of the sun significantly over the masses of all the planets combined reduces that complexity. For Nuclear Physics, however, all particles of the nucleus, protons and neutrons, collectively known as nucleons, are almost equal in mass, and so no such simplification exists. The problem is also a Catch‐22, of sorts. To study the structure of nuclei, one needs to observe the effects of their reactions with either particles (protons, electrons, neutrons, etc.) or other nuclei and infer the structure.
However, that relies on knowing the dynamics of those reactions. And the dynamics of the reactions relies fundamentally on the knowledge of the structure of the nuclei themselves. Models are required for both, and the development of the models for both structure and reactions, and how they combine to describe phenomena, is the purview of Nuclear Theory.
This is especially true of the study of exotic nuclei. These are unstable, but still bound, nuclei, whose knowledge is critical in the understanding of the synthesis of the elements in stars. They exhibit some odd structures: skins, where the excess of one form of nucleon over the other forms a skin of that nucleon around the core, and halos, where the binding is much looser and one or two of the excess nucleons appear in orbit around the core, much like an atom within the atom.
Those nuclei present challenges to nuclear theory: detailed descriptions in terms of nucleons still eludes, and has formed the basis of my research for almost twenty years. This research continues, and finds relevance in the flagship programme of iThemba Labs, which is building a radioactive beam facility. My talk will describe facets of my research, and how various aspects relate in order to answer the underlying question of the many‐body problem. It is not an easy task, given, in the words of Albert Einstein: “The scientific theorist is not to be envied”. 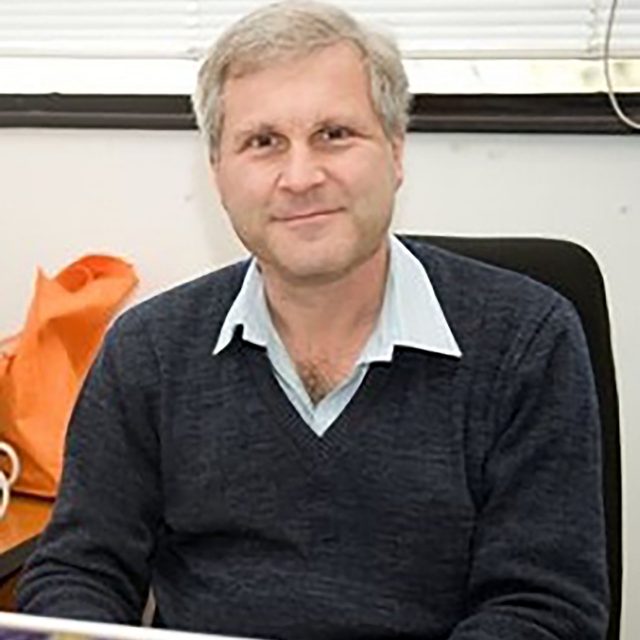