For the first time in the history of the University of Johannesburg (UJ) Netball Club, Coach and Manager Bongiwe Msomi’s squad has cruised to the top four teams in this year’s FNB Varsity Netball tournament. The Orange Army, UJ, has won five of their seven matches after handing the University of Pretoria (UP Tuks) a 53-51 defeat in Bloemfontein on Monday, 03 October 2022.

The UJ senior women’s netball team won their last three consecutive fixtures against Tshwane University of Technology (TUT) in Potchefstroom on Monday, 26 September, the University of Western Cape (UWC) on Sunday, 02 October, and UP Tuks in Bloemfontein. This was UJ’s second victory over UP Tuks this year, after the Orange Army was crowned the University Sport South Africa (USSA) champions in Tshwane earlier.

In the game against UWC, UJ led with the highest points throughout the four quarters of the match, winning the match by 74-24. However, the Johannesburg side encountered fierce competition against UP Tuks with both teams taking lead turns in the third quarter. There were between 1 and four points difference between the UJ and UP Tuks from the second quarter until the last whistle. Though UJ opened the first quarter by leading on the scoreboard, UP Tuks’ persistent fight back gave the UJ ladies a run for their money.

The nail-biting UJ-UP Tuks match had the two teams’ crowds cheering from the first to the last minute of the game. Both teams were in it to win it, competing for a spot in the last four teams to battle it out in the semi-finals on 10 October 2022. The unwavering support of the UJ team on both the match days gave UJ the upper hand on court. UJ staff and students travelled ‘all the way’ to Bloemfontein to support the netball team on both the two days.

The whole UJ squad presented a highly competitive edge to the team. Cornelia Mupenda, Nomfundo Mngomezulu, Tarle Mathe, Lisa Kruger and Mihluri Hlatshwayo gave the opposition teams a tough time on court, with Tarle Mathe winning three Player of the Match accolades in a few matches since the start of the tournament.

UJ will take on Stellenbosch University (SU Maties) in the semi-final. 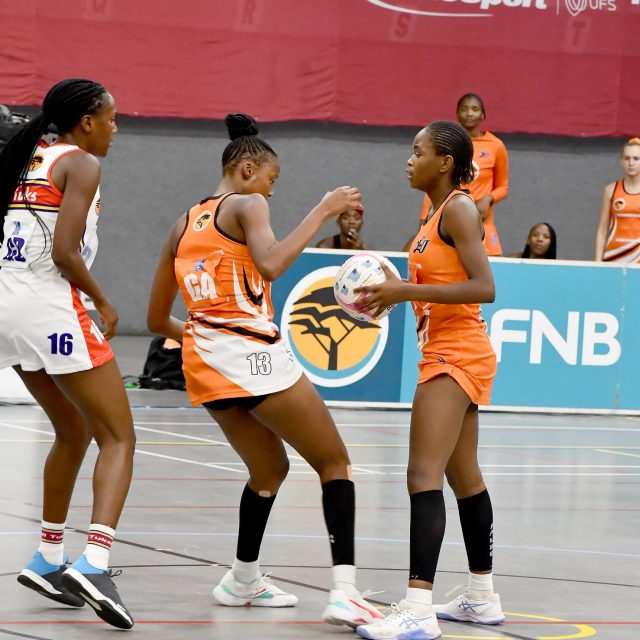