On Monday 22 June 2015, the University of Johannesburg (UJ) Energy Movement held a public lecture in Windhoek, Namibia. This was after Ilanga II, a solar powered electric car left South Africa on Thursday 18 June to embark on a 4 160 km educational road trip dubbed the 2015 African Solar Drive. The Drive aims to raise awareness about green technology in a series of lectures along the route from South Africa, Namibia then Botswana.

During the educational road trip, the students collected and analysed data to optimise the performance of Ilanga II, which will later be used to attempt to set the solar-only land speed world record.

For this trip, the car boasted a number of upgrades. (See the project manager Mr Warren Hurter speaking about this on the video below).

The trip started in Kimberley on 18 June with the solar car named Ilanga II, which means “the sun” in isiZulu.

The vehicle is designed and built by UJ Engineering students at the university’s Manufacturing Research Centre at the Auckland Park Kingsway Campus in Johannesburg. It forms part of the UJ Energy Movement programme, managed by Ms Nickey Janse van Rensburg, a lecturer in Mechanical Engineering Science.

The team has been presenting a series of public lectures, visiting schools and Universities along the route and showcasing innovation in green technology. At each town the students share with school learners how they can enter research or study for a career in the fields of science and engineering relating to alternative energy.

The route has been planned to function as an educational tool developing students into young professionals, to promote STEM(Science, Technology, Engineering and Mathematics) to schools, students, researchers and industry role players. The North-West province is also a hub of solar energy development.

The UJ Energy Movement is a multidisciplinary programme promoting skills development, energy conservation and sustainability through technology innovation with a focus on STEM (education.

The programme was established in 2010 and is designed in an overlapping three year cycle, where students participate as undergraduates, mentored by postgraduate students. Then they themselves enter into the postgraduate programme for two years, mentoring junior teams and building the next generation solar vehicle.

The UJ Solar car and support vehicles sponsored by Mitsubishi followed the route below:

Preparing for a real-world experience: For the trip from Kimberley to Gaborone, the team upgraded the front suspension, custom-built new composite carbon fibre rims and high-capacity battery packs. Every upgrade counts on a 4160km endurance trip across the desert in a fragile vehicle. 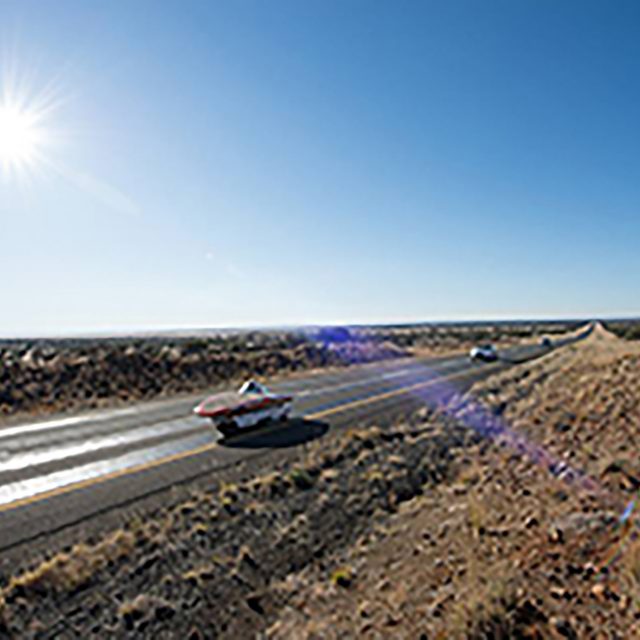