​​​​​The 2012 National winners of this year’s Miss Earth South Africa in association with Consol, were crowned at a glittering gala dinner at Montecasino in Johannesburg in August. Celebrating ten years of Environmental Advocacy, Johannesburg environmentalist Tamerin Jardine took the coveted title. Jardine, who recently turned 25, has been a part of extensive environmental, sustainability and conservation projects over the past eight months.​

​Jardine was one of the finalists who also travelled to Zambia as part of this leadership programme to plant trees as part of a reforestation initiative, was part of food security projects and energy efficiency campaigns. The newly crowned winner believes that she has stood up against what is right and morally ethical when it comes to not only conservation and environmental protection but the state of our schools, educational system and the recycling infrastructures in communities.​

​​The gala dinner hosted by home of Miss Earth – Tsogo Sun, was as green as can be, all food left over’s, cut offs were taken by Earth Probiotic to make compost with, which once again goes into the school greening projects during Arbour month. Additionally all ingredients from the dinner were locally sourced with each element of the night being thought through carefully.​

​​Tamerin is flanked by her team of green ambassadors who placed in the top four, they are, Marina Nicolaidis of Bedfordview, Chanel Davids from South of Johannesburg and Aurelia Nxumalo of KwaZulu Natal. The 2012 Green Project of the year went to Western Cape greeny Lara Potgieter, Pretoria beauty Charlotte Clark and the Free State’s Bloem representative, Annchen Richter. Also in attendance at the gala dinner were University of Johannesburg Vice-Chancellor Prof Ihron Rensburg and 2012 London Olympic Gold Medalist Rower Lawrence Ndlovu. Look out for more about where Tamerin’s journey to Miss Earth SA began and how she will be affecting change during her year of reign in an upcoming video interview.​ 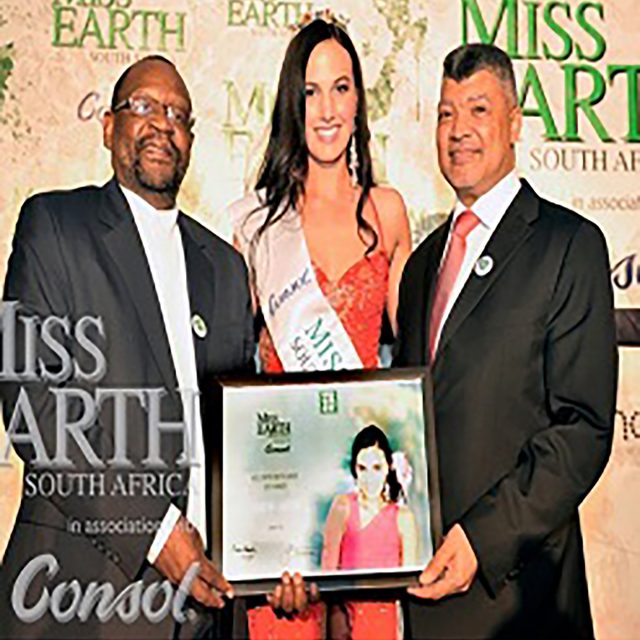