Du Preez, a UJ alumnus – and a member of Henri’s UJ Sport Club for Athletes with Disabilities from South Africa, accomplished the feat at the Brusselton Ironman in Western Australia. Examining the full scope of Du Preez’s accomplishment shows amazing adaptation, determination, planning, logistics, and teamwork (assistance is allowed under Ironman rules).

A C6 quadriplegic, Du Preez is a quadriplegic with limited upper limb movement – no finger movement, limited triceps and paralysed from the chest down. This condition was caused when he was hit by a vehicle while cycling on 6 October 2003.​

Du Preez’s strength comes from bicep and shoulder movement. Swimming with no tricep movement, he can’t do the overhead ‘crawl’ like a paraplegic swimmer and instead does a ‘double-armed backstroke’. During the open water swim, he relies on a swimmer behind him to ‘tap’ his legs to maintain direction. Two assistants help him from the swim/bike and bike/racing chair transition.

Du Preez uses adapted ‘grips’ that enable his hands to grab the handcycle peddles. Because his body doesn’t sweat, his team soaks him with buckets of water to prevent overheating.

Six weeks before the race, Du Preez was thrown another challenge when he broke his arm. Although it healed enough to race, he was weakened by the interruption in his training.

On race day, Du Preez broke the barrier and entered the record books as the first quadriplegic to finish an Ironman. His finish time is a respectable 13 hours, 20 minutes — the broken arm put him 20 minutes short of his goal of sub 13-hours.

Du Preez’s is a true champion and achieved his world class athletism while holding down a full-time job as an actuarial analyst.

Du Preez already has his sights set on the next goal, competing and finishing the World Ironman championships in Kona, Hawaii. 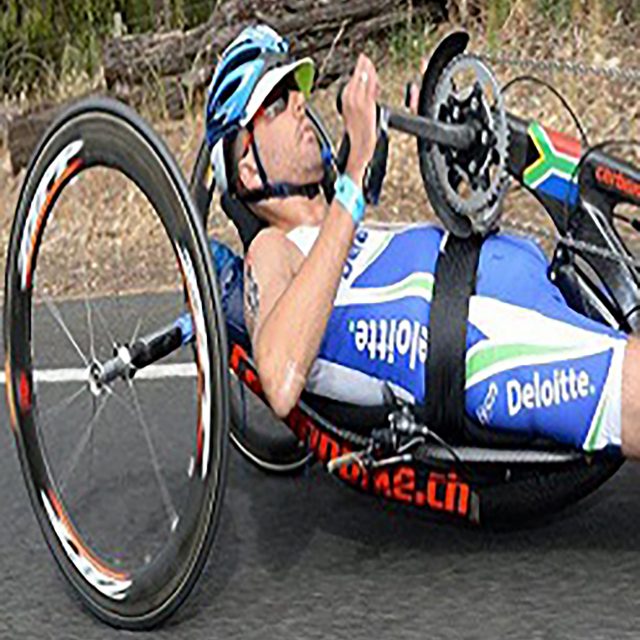