The men’s team won gold in the 4km x 4 relay while the women won silver in the 2km x3 relay. Regulars to the podium finish, Nkosinathi Sibiya and Ryan Mphahlele, won gold and silver, respectively, for the men’s 4km race.

“Winning a gold medal for UJ is always part of winning the USSA competition in my plans. We always go for gold; we condition ourselves mentally for because we are the defending champions. Overall it was an amazing experience. We worked as a team, this was clear even with the gold medal team prize in the 4km race,” explained Sibiya, a third-year Transport Management student who joined the UJ Athletics Club in 2020.

Chris Mhlanga and Sisanda Dumisa replicated the results produced during the 2022 Athletics South Africa (ASA) Cross Country n Rustenburg, winning a silver medal in the men’s  10km race and a gold medal in the women’s 10km race. Both the men and women teams took gold medals.

This was Mhlanga’s second individual medal in a national race. “It was a great experience. I knew what to expect judging by last year’s USSA performances. I went there with a very positive mind. I was actually aiming for the title in that 10km, but unfortunately it didn’t go as planned,” said Mhlanga who joined the UJ Athletics Club in 2021.

Dumisa reiterated Mhlanga’s sentiments. She said her medal meant so much to her; this was her first time winning a gold medal at the USSA Championships. She is enrolled for a diploma in Transportation Management and, thus far, has had a fruitful athletics season at UJ. 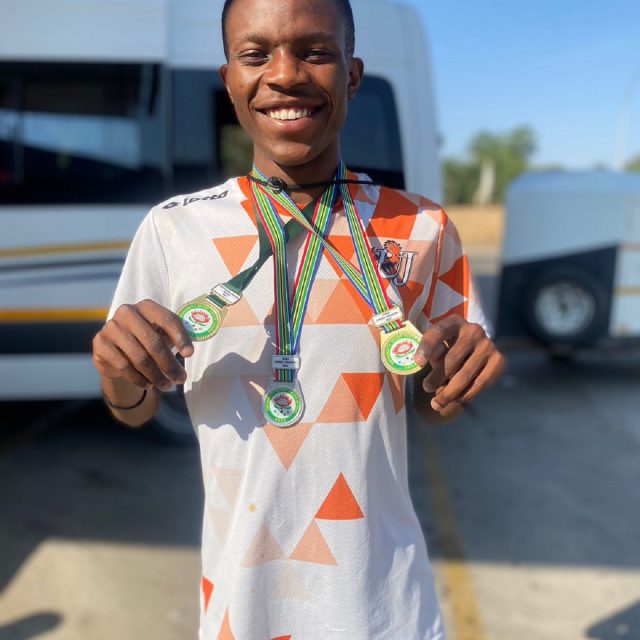