“The route was never straightforward; focus, dedication and commitment is what one needs to earn a PhD”

“Completing a PhD in Strategic Communication has been a long and lone journey. It is an individual decision and commitment that needed me and only me. It started at a small town of Phongola in Northern KwaZulu Natal where I began my schooling years in Mgazini Lower Primary School, Ncotshane Higher Primary then Ophongolo High School. Without discipline and focus in those schooling years it would have been difficult to obtain the required pass mark for a tertiary institution entrance”.

“Becoming an educated person has been my desire, influenced by my late aunt’s husband. He always drew a picture of how good, educated people conduct themselves in a society, which then created a burning desire to become an educated person”.

“After completing my grade 12, I enrolled for a National Diploma in Journalism at the Durban University of Technology. I then moved to the Gauteng Province where I underwent internship with Etv (which is now ENCA), Associated Press, African Soccer TV and Kathorus Community Radio. I then joined the South African Broadcasting Cooperation as a News Reporter during the 2006 local government elections. I was subsequently appointed by the Gauteng Provincial Government as an Assistant Director: Communication, which I am still serving as a Deputy Director: Publications, Social Media and Website Content Management”.

The idea of earning a PhD became more of a reality when I enrolled for a Bachelor’s Degree in Public Administration at the University of South Africa in 2012, then Honours Degree Integrated Organisational Communication and Bachelor’s Degree in Policy Study. I then enrolled for a Masters Degree in Strategic Communication with the University of Johannesburg in 2015 and later a PhD in the same institution.

The route was never straightforward; focus, dedication and commitment is what one needs to earn a PhD.

Halala Dr Shabangu – we salute and congratulate you as the Department of Strategic Communication! 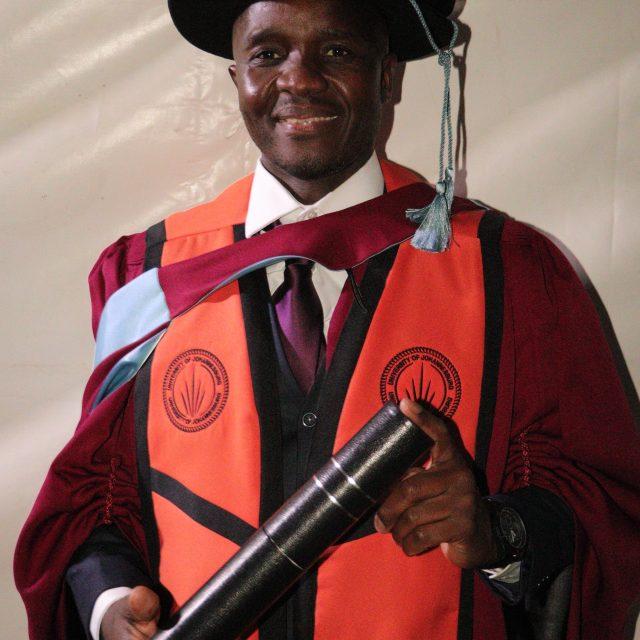