The African Solar Drive – a journey of the UJ Solar car, Ilanga II

​​Ilanga II, the solar-powered car of the University of Johannesburg (UJ) Energy Movement was admired by observers and received special recognition for its innovative use of advanced technology at the 2015 African Solar Drive launch (Tuesday, 09 June 2015), a Sub-Saharan adventure which will see Ilanga II cross the border into Namibia and Botswana.

During the 4 160 km educational road trip, UJ engineering students will be collecting and analysing data to optimise the performance of Ilanga II, which will later be used to attempt to set the solar-only land speed world record, which starts on 18 June 2015.

Aside from the adventure of the drive, an important focus of the 2015 African Solar Drive is to raise awareness and promote green technology. By showcasing Ilanga II and hosting public lectures, the UJ Energy Movement aims to share their experiences with schools, students, researchers and people that are interested in pursuing a career in the fields of science and engineering, specifically relating to alternative energy. The lectures will be taking place in Kimberley, Upington, Windhoek and Gaborone.

Aside from the public lectures, the solar drive team is also visiting rural towns along the route to inform people about the importance of renewable energy and sustainability and easy ways to implement it in our daily lives. To complement the team’s efforts, they have partnered with Prof Vivian Alberts at PTiP Innovations, who have developed wholly local (and internationally patented) thin film photovoltaic technology, which they hope to pilot in rural communities in the near future. PTiP will be utilising the 2015 African Solar Drive route to identify possible community outreach programmes that can utilise PTiP’s innovative product to vastly improve living conditions.

Says Ms Nickey Janse van Rensburg, Mechanical Engineering Science lecturer and the UJ Energy Movement Programme Manager: ““The UJ Energy Movement programme was established in 2010 to help promote skills development, energy conservation and sustainability through technology innovation. We are really excited to be taking Ilanga II on its longest trip yet and introducing the programme to our neighbours across Africa,”

Spectators can look forward to seeing Ilanga II along the route and at specific pit stops; the solar powered electric car was awarded the Technology and Innovation Award at the 2014 Sasol Solar Challenge and is one of the most advanced solar powered vehicles produced by UJ students and industry partners to date.

Mr Warren Hunter, Team and Technology Manger of the UJ Energy Movement programme, explains that there are a lot of logistical arrangements behind the 2015 African Solar Drive. “A team of engineers and academics has been involved in the technical planning of this twelve day road trip to make sure operations run as smoothly as possible.”

Mitsubishi, the official transport partner for the tour and supplier of a full fleet of vehicles for the 2015 African Solar Drive’s ground patrol team is delighted to be on board. “We are proud to be involved with the 2015 African Solar Drive. In keeping with our motto of making every single drive an adventure through innovative design, the solar car project is a natural fit for us,” says Mr Braam Faul, National Marketing Manager of Mitsubishi Motors and patron of the UJ Energy Movement.

To add to the interest of the trip, Mitsubishi Motors has tasked the students to have their own Economy Run with the vehicles provided to them. Mitsubishi products like the Mirage are extremely fuel efficient, in fact the Mirage is touted as the most fuel-efficient non-hybrid petrol-engine vehicle in the United States. The fuel consumption of all the vehicles will be calculated on the combined trip of 4 160 kilometres.

The 2015 African Solar Drive Twitter competition If you spot the Solar Car along the route don’t hesitate to upload a photo on Twitter by using @UJSolarCar and #‎AfricanSolarDrive or the UJ Solar Car Facebook page. Who knows, you might be the lucky winner of a Google Tablet. 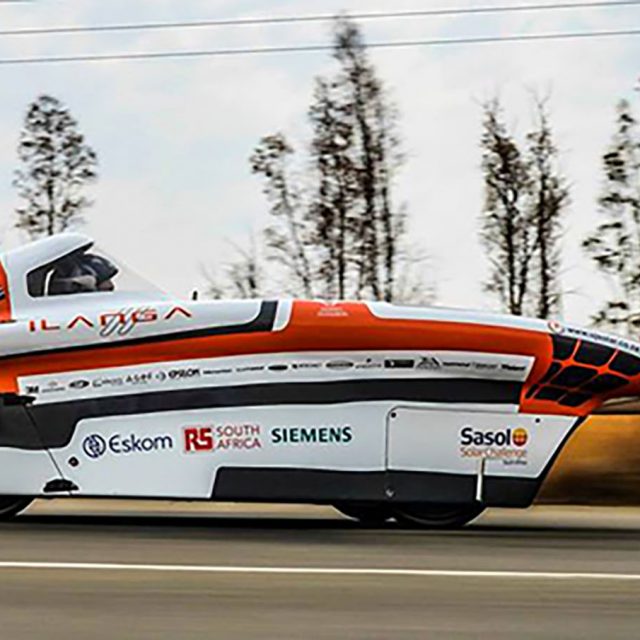