South Africa must shift from consumption to investment

​​Finance Minister Pravin Gordhan says South Africa’s economic growth is inadequate, and the government must shift from a culture of consumption to investment. He was addressing the public on South Africa’s national development imperatives whilst ensuring fiscal sustainability – challenges and choices – at the University of Johannesburg (UJ) on Thursday, 25 April 2013.

While pointing out some of the major economic hiccups which South Africa endured due to the recent strikes, Mr Gordhan also brought forward the right choices South Africa made in repositioning itself. He emphasised that South Africa kept itself in the global economy, made linkages in the BRICS environment on the African continent, and that the local firms must benefit in Africa’s emergence as the new source of growth and demand.

Mr Gordhan said South African government institutions must be responsive to the needs of communities. He mentioned that the government must improve the quality of expenditure. “We need to create inclusive government institutions that will enable our people of all backgrounds to contribute to and benefit from the growth of our economy,” he said.
The Minister highlighted that youth unemployment, poverty, and poor education and health remain the most tormenting challenges to South Africa. He declared that corruption was not only in government, but also in the private business sector – which is detrimental to the country’s full development potential.
The lecture was hosted by the Faculty of Economic and Financial Sciences (FEFS) and the Library and Information Centre as part of the Library’s lecture series. 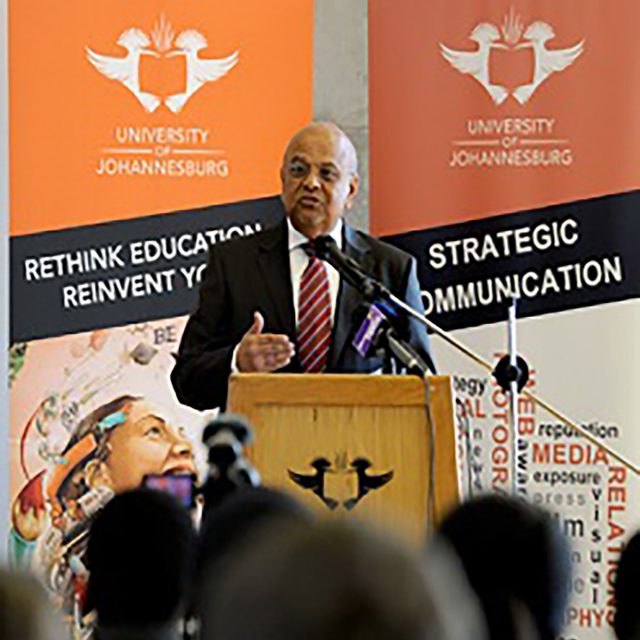