The South African Institute of Physics (SAIP) recently recognised Prof Simon Connell, from the University of Johannesburg (UJ), for his contribution to building the discipline of physics in the country. Prof Connell contributes to the ATLAS experiment (CERN) and conducts applied research for the mining industry at the National Research Foundation’s iThemba Labs.

Prof Connell received an honorary membership from the SAIP on 7 July 2017 at the awards ceremony of the SAIP Annual Conference banquet, held in Stellenbosch.

“Science can play a very important role as an engine for democracy and sustainable development. I see this increasingly in a pan-African context. About 40% of the world’s youth will be African by 2050, up from about 10% in 1950, according to a UNICEF report,’’ said Prof Connell.

“There is tremendous potential for global science projects to assist in solving problems, from disease and environmental sustainability to removing the basis for intolerance and for promoting the benefits of diversity. I am now privileged to be working on several exciting projects with many excellent colleagues world-wide, in these areas,” he added.

Prof Connell led the process to register the SAIP as a professional body and building the organisation to play this role sustainably. During his time as President of the SAIP, the South African Physics community identified deficiencies in Basic Education and undergraduate preparation as the most important threats to the health of the discipline. He was instrumental in coordinating several long-term interventions and the collective development of programmes to address these challenges.

“I was very privileged to continue the work of former SAIP Councils and Council Presidents. One of the excellent projects was a SAIP-UJ partnership in a very important pilot Teacher Training project, which is now being rolled out nationwide. This partnership was facilitated by Prof Azwinndini Muronga as the then UJ Soweto Science Centre (SSC) Director; as well as UJ’s Dr Sam Ramaila, who was the SAIP Council member chairing the Physics Education division and acting director of the SSC at the time,” said Prof Connell.

Prof Connell has led the UJ group contributing to the ATLAS experiment at CERN, the European Organization for Nuclear Research, from 2008 until the present.

“The style of my participation at CERN was both related to my own specific research, as well as partnering with SA colleagues in a way that together we worked to broaden the footprint of the project nationally and build opportunities for the entire community more generally,” he said.

“To me, Physics research is its own award: insight into the functioning of the cosmos, and enlightenment in many areas of life, which thinking according to the scientific method brings,” said Prof Connell. 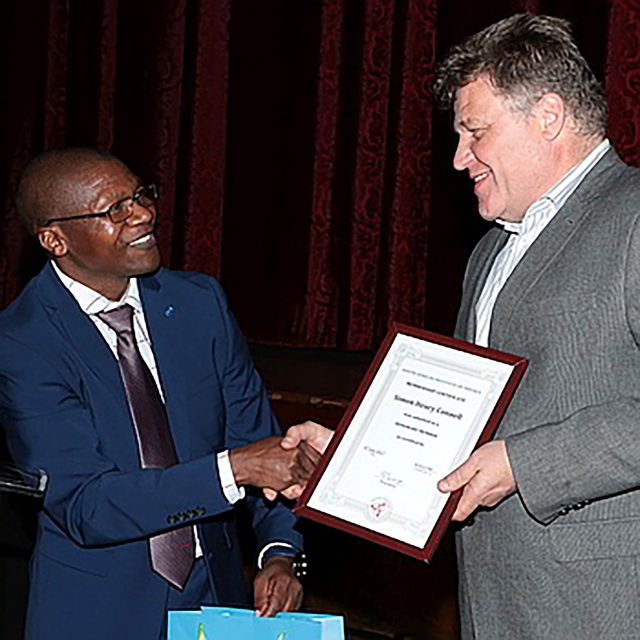