​​Researchers at the University of Johannesburg (UJ) have found evidence that animals evolve much faster than previously thought. By sequencing thousands of genes instead of ‘barcoding’ one, they are confirming that evolution happens without isolation, despite Darwin’s theories going out of fashion for a while. The research may have future implications for the South African fishing industry, two hundred-odd years after Charles Darwin’s birth in February 1809 .

Some animals can look exactly the same in every possible way. So similar in fact, that experienced researchers won’t be able to tell them apart just by looking at them. For example, fishermen on the South African coast catch sandprawns for bait every day. They think the sand prawns from the Cape (and the colder West coast) are exactly the same as those on the warmer East coast between East London and St Lucia.

Not so fast, say researchers from the University of Johannesburg, who study various sea animals.

A while ago Prof Peter Teske was doing genetic ‘barcoding’ of various fishes, looking at a single gene in their DNA. Teske is Associate Professor at the Department of Zoology, UJ, and a research associate at the Molecular Ecology Lab at Flinders University in Australia. Teske collaborates with Prof. Luciano Beheregaray and Dr Jonathan Sandoval-Castillo at Flinders University.

“I got annoyed because I did not find any clear patterns. In some species you find that populations in different marine regions are distinct. In others, nothing,” says Teske.

”If you look at the ‘barcoding’ gene, or mitochondrial DNA, sometimes you cannot see differences between organisms. You need more markers to be sure that what you are looking at is different from others that look exactly the same,” explains Dr Mbaye Tine, a post-doctoral fellow working with Prof. Teske.

These days Teske, Tine and the teams at UJ and Flinders University don’t just sequence one gene to tell species apart. Instead, they sequence thousands of genes. Then they look for the differences on a few genes that will indicate that a population is changing, or evolving, to better survive in its environment.

“When we find those differences, we can say that the Darwinian adaptation, or ‘speciation’ has just started. We’ve realised that Darwinian evolution can happen much faster than we thought,” says Teske.

“That evolution affects genes that have adapted to a certain environment. These genes become distinct very quickly. For example in one population the gene adapts to warm conditions you find on the Natal coast. In another population the gene adapts to the colder conditions on the West coast. This one gene is enough for the two populations not to mix at all: they’ve adapted to their habitat and will die if they’re put into the other, so they don’t go there.

Meanwhile thousands of other genes tick away like a clockwork – it takes very long for differences to appear on those. Physical, or morphological, differences you can see take even longer to appear.”

Darwin back in the running

Darwin went out of fashion for a while, says Teske. If there is a barrier between two populations of the same species, the populations will change over time and become separate species. Today we know that Darwinian adaptation or ‘survival of the fittest’ isn’t needed to explain what’s happening in that case.

In South Africa, there are no physical barriers between the colder ocean and the warmer ocean. So the country is a ‘natural laboratory’ to study evolution, because there is nothing in the way of animal wanting to move from the warmer to the colder ocean, or the other way round.

However, in his research of cold-blooded sea animals such as fishes, crabs, sand prawns and mussels, Teske has not found even one animal swopping oceans like that. Every species he has looked at tends to stay ‘at home’ in its part of one ocean, or marine ‘province’.

“This is where Darwin’s ideas are being revived now: that adaptation to another environment is actually driving speciation, without any real isolation, or physical barrier. Now that we can identify the genes that are under adaptation, we realise how important Darwin’s work still is.”

“We have a strong hypothesis (or call it a strong suspicion if you will), that any species that is present in more than one marine province, is actually two or more species. In other words, we have completely under-estimated biodiversity around the South African coast, because we cannot distinguish the animals from each other just by looking at them,” says Teske.

Dr Tine will be conducting more research in the next few years to see if the hypothesis holds up.

So far, they have very promising results supporting the hypothesis from the Knysna sand goby, a tiny little fish found from the west coast to the Wild Coast, as well as snails, mussels, crabs and sand prawns.

Next, the researchers will scrutinise sardines, an extremely important species in the commercial fishing industry.

“If we find anything similar in the sardines to what we’ve found in the Knysna sand gobies, it’s going to have a huge impact on ways of managing the fishing industry in South Africa,” says Prof Teske.​​​​​​​​​ 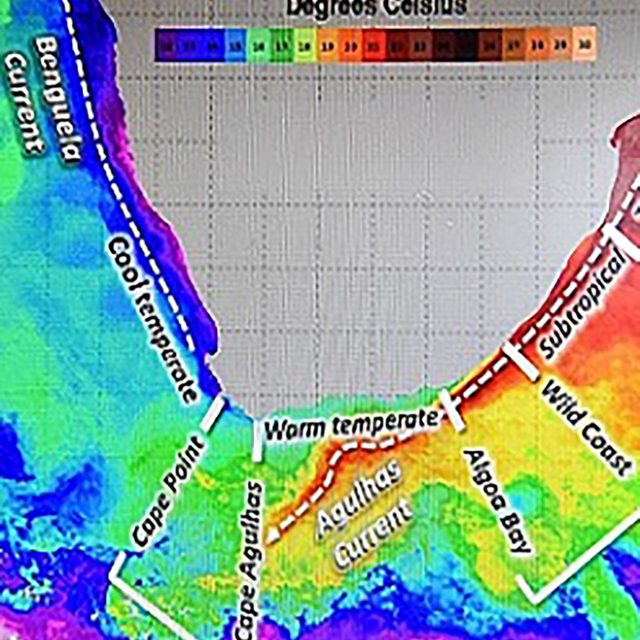