Former Chancellor of the University of Johannesburg (UJ) and South African businesswoman, Wendy Luhabe, was recently appointed the Honorary Lieutenant of the Royal Victorian Order by the British Royal Family for her services at the Duke of Edinburgh’s Award International Foundation.​

Speaking at a celebratory breakfast event, hosted by Dr Sizeka Rensburg (UJ alumna and wife of Prof Ihron Rensburg, Vice-Chancellor: UJ), Lady Luhabe, one of the few from the African continent to be honoured with this accolade, shared her journey as a black South African woman who grew up in South Africa’s apartheid years. She also reflected on her career growth and breakthroughs especially in a male dominated profession; and on the role she played to uplift and empower communities all over the world when she addressed the University’s top female executives on Wednesday, 01 October 2014. Says Lady Luhabe: “Circumstances in my life shaped me to become the woman that I am today. We are responsible for our lives. We should not wait for our parents, the government or anyone to give us something in order to advance our lives. However, to do better in life, we need people who will believe, inspire, challenge and guide us to become better because there are moments when we have doubts and do not believe that we can achieve our dreams. Not everything that we do in our lives will be successful, but we need to keep trying. The world is desperate for leadership and I believe that women should step up to the task.” Lady Luhabe has been recognised for the 10 years she has given to working for the Duke of Edinburgh Awards, a leading youth charity that helps youth aged between 14 and 24 to fulfil their potential by learning skills for life.​ She has pioneered many initiatives for the economic empowerment of women and their participation in South Africa’s economic landscape. She is an active mentor, accomplished author and powerful role model who is known for her writing and speaking engagements. As a young woman raised by her mother who separated from her father in the 1960s, Lady Luhabe was raised in Daveyton in the East Rand, Gauteng, before moving to the Eastern Cape with her mother and her two sisters. She graduated in Arts from the University of Fort Hare in 1977 and in Bachelor of Commerce from the University of Lesotho in 1981. Lady Luhabe worked for a few local companies a year after graduating from the University of Lesotho and struggling to find employment. Some of the major South African corporates she worked for were BMW and a cosmetics company, before clinching a three year work experience in the USA.​​

After 10 years of national and international business experience, Lady Luhabe founded Bridging the Gap in 1991, a consulting firm which helped balance business equality. Lady Luhabe founded the firm solely to help prepare emerging black South African graduates to enter the corporate world and grow small business entrepreneurs. Lady Luhabe is also famous for her sterling work in founding Women Investment Holdings in 1993, a company which sought to start women participation in the South African economy. Amongst her many accomplishments, she was listed as one of the 50 Leading Women Entrepreneurs of the World, Global Leader of Tomorrow in the World Economic Forum, and became the Chancellor at UJ in 2006.​​ 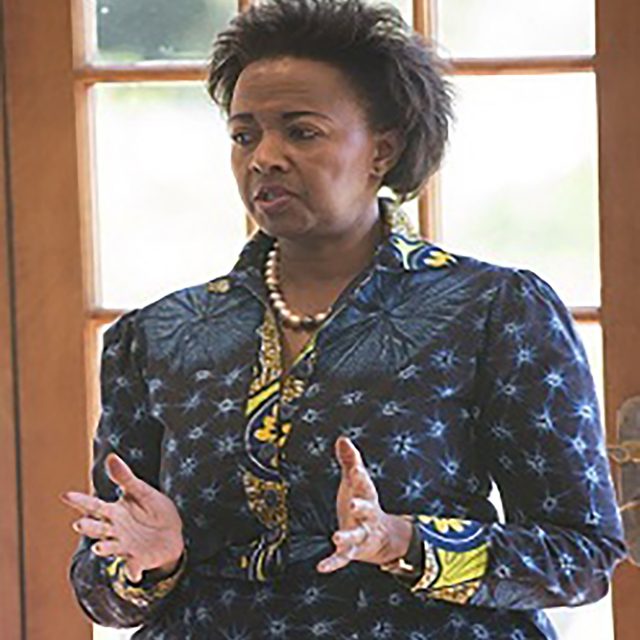