Dr Musa Njabulo Shongwe graduated with his Doctor of Laws (LLD) from the University of Johannesburg (UJ) on Monday, 1 June 2015. The Doctor wishes to inspire future University students to follow in his footsteps and aspire to be great.

Dr Shongwe is a young aspiring legal academic who came one step closer to achieving his goal on Monday when he made both his wife and young daughter proud – graduating with his LLD. His doctoral thesis was “The Fragmentation of International Law through Regionalism: Towards a New World Order.”

Which according to Prof Strydom – who was Dr Shongwe’s supervisor through his doctorate studies – deals with: “The concern raised by a growing number of scholars and commentators over the past two decades about the potential undermining of the unity of the international legal order as a consequence of the proliferation of specialized international law regimes and institutions.”

Dr. Shongwe has an undying interest with relation to all aspects of international law and is charmed by the way it works: “I am mostly intrigued by how international law treaty is made. States normally conclude treaties without paying sufficient attention to other international treaties that are in existence and binding at that time. This occasionally leads to problems of incompatibility or conflict of treaties. The expansion and diversification of international law has been accompanied by the rise of specialized regimes that have no clear relationship to each other, and are not subject to coordination or review, nor based on any hierarchical relations.”

The young and intellectual graduate describes his academic journey at the University as challenging but rewarding. He accredits his success to his constant hard work and having the reminder that the ultimate purpose of being in an excellent institution such as UJ should be nothing but to grow as an individual and produce academic excellence.

As an international student he has had to overcome several administrative and financial hurdles throughout the years. “Apart from those obstacles my academic journey has been enjoyable, I was privileged to be placed under the National Research Chair for International law in South Africa through which I have attended many local conferences and I have initiated a number of my own research projects based on ideas and information emanating from the Chair’s networks.”

Dr Shongwe is grateful to have had UJ’s Prof Strydom as a Supervisor and says: “I able to complete my degree because of the invaluable support from my Supervisor, Prof Strydom who is an expert in international law, and was able to guide me through the learning process. He challenged and sharpened my critical thinking ability and for this I’m internally grateful.” The 30 year old is not short of ambition and plans on becoming the Secretary General of the United Nations and after that, “I plan to rule the world,” he said in a humours manner.

Shongwe spreads words of encouragement for those looking to follow in his footsteps by saying: “There are good opportunities to pursue a major in international law not only at UJ. Prospective candidates must carefully identify a Supervisor most knowledgeable in their field of interest, and place themselves where there is good institutional support.” 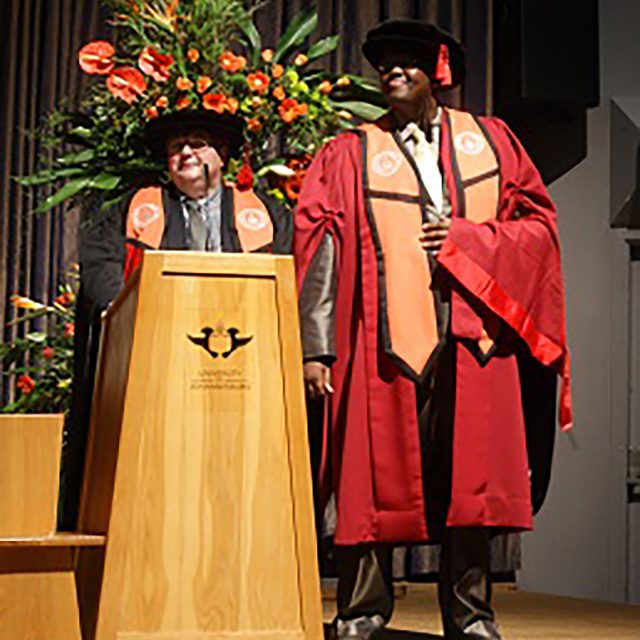