The sound of a vacuum pump quietly rotating penetrates the room. Such equipment is available in every laboratory for organic chemistry. The one of Derek Ndinteh at the University of Johannesburg in South Africa is no different. The 41-year-old natural chemist from Cameroon conducts research on indigenous plants in Africa. Some of their active ingredients can be used in medicine.

“Nature is the best laboratory. I lost a cousin of mine, we were together at the university. I was very attached to her. She died of diabetes. So from that day, I wanted to cure diabetes and I’m going to find a cure. I’m going to win the Nobel Prize. I’m going to be the first black Nobel. ”

Scientific research has a hard time in Africa. More than half of all African countries invest less than 0.5 percent of gross domestic product in research. In Germany it is almost three per cent. Well-equipped libraries, laboratories and funds for research and teaching are missing in Africa. Scientists often only collect data, which are then analyzed and published at Western universities.

There are centers of excellence all over the continent

Derek Ndinteh came to South Africa in 2009 to conduct laboratory tests for his doctoral thesis. His home university in Cameroon’s capital, Yaoundé, lacked the facilities, as many universities in Africa.

“Back home, they give you nothing, zilch, zero, nothing. You pay for school. We used to have what they call ‘Theoretical Practicals’. So you go to your practical, you say: ‘Imagine a test tube.’ You imagine. ‘Imagine now you’re pouring…’ That’s how we used to mock our practicals because you dont touch anything basically.“

Many students and scientists go to Europe or the USA to study and research. Ndinteh changed the country, but remained on the continent.

“One reason why I stayed in Africa is that all of my friends have gone to the US after the A Level or after the first degree. So I said I would prove to them that good science can be done in Africa from Africa that impacts the world.”

Many African researchers who choose a career on the continent want to contribute to the progress of Africa. The conditions are difficult: In spite of a solid foundation, teaching is often not up-to-date. Student numbers are overwhelming. According to experts, this achievement is seldom appreciated. Meanwhile, the research is on the rise. There are centers of excellence all over the continent.

Cameroonian Derek Ndinteh grew up as the third of seven children in the capital, Yaoundé. As a young boy, he wanted to become a pilot, a profession that many young boys in Africa dream of. But good school notes led him to the university. Most of his siblings today also pursue careers in science. His father was a chemistry professor and his great role model and mentor. Before he died, he urged his son to leave the nest and find a university where he can do research. So he came to Johannesburg.

“The danger in a well-equipped laboratory is that you go brain dead. You do not have to improvise, you don’t have to think out of the box, you don’t find solutions. I try to steer away from it because you use fancy equipment, you do analysis, it’s novel but there is no thinking involved.“

Derek Ndinteh has made a virtue out of the hardship of an empty laboratory in Cameroon – which is now getting recognized. The South African government has just given him 50,000 euros of research funding to extract two components from an invasive plant species for medicinal drugs. He encourages his students not to despair in light of the difficulties in the African research landscape.

“I would like to motivate a lot of young Africans: You can do it, I have done it in Africa, too. When I go back home to do seminars of faculty talks, I tell them that your disadvantage is your advantage.” 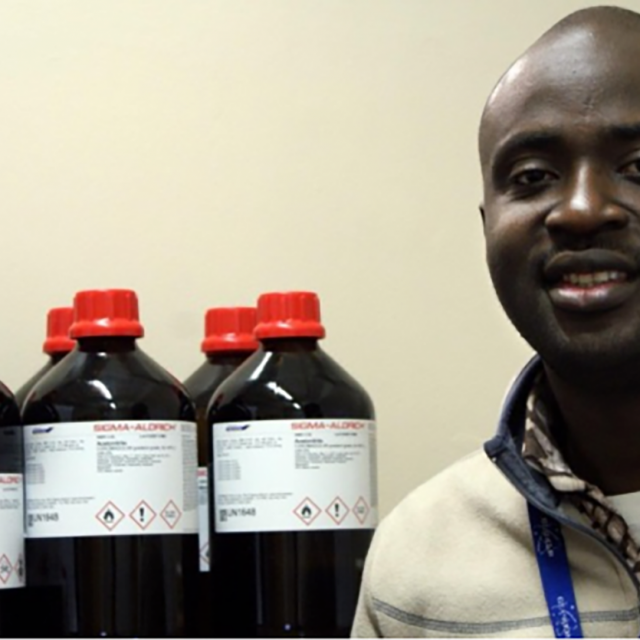