In recent years, the South African cricket scene has had a number of promising players of colour who have proved to be ready for a future with the national cricket team, the Proteas. Levert Manje is one of the emerging young cricketers who made his debut for the Imperial Lions on 27 March 2022.

The Transport Management student at the University of Johannesburg (UJ) continues to excel in cricket. He signed a rookie professional contract with Imperial Lions after the 2020 ICC Under-19 Men’s Cricket World Cup.

“Playing for the Lions is something that I cannot explain. It is a dream come true for me. My goal is to play for the Proteas in the future. This keeps me going and I know that my growth in cricket is a motivation to so many other kids that look up to me,” says Manje.

The youngster, from Toekomsrus in Randfontein, boasts a colorful resumé. He made his professional debut in the 2019–20 CSA 3-Day Provincial Cup, playing for the Gauteng Province. Since then, he has also played for the Imperial Lions Under-17 A and Under-19 A teams and was part of the South African Under-19 team that participated in the 2020 ICC U19 Men’s Cricket World Cup.

Manje has gone through the different ranks to play at his current level. At some point, he says, he had to wait six months before getting his debut and that meant that he had not enough game time.

He joined the UJ Cricket Club in 2020 and was part of the team that won the 2022 Enza Premier League title. “It is a privilege to play for the UJ Cricket Club. The University has a rich cricket background and it has provided me with great cricketing experience,” explains Manje.

“I think the important thing is to come through the youth and the school system and play in the Provincial teams and then form part of the pipelines, that is the Lions Cricket pipelines which are the feeder system to the professional side,” says Siyabonga Sibiya, UJ Cricket Club Manager and men’s cricket team Head Coach.

Coach Sibiya emphasises that it was a collective effort from the UJ Cricket Club and the Imperial Lions team to ensure that Manje gets all the support he needs to become successful.

Manje started playing Cricket in Grade 4. Since then, he has drastically improved as a player. He looks up to the likes of Reeza Hendricks, who is a regular in South Africa’s T20 team and is currently playing for Imperial Lions. 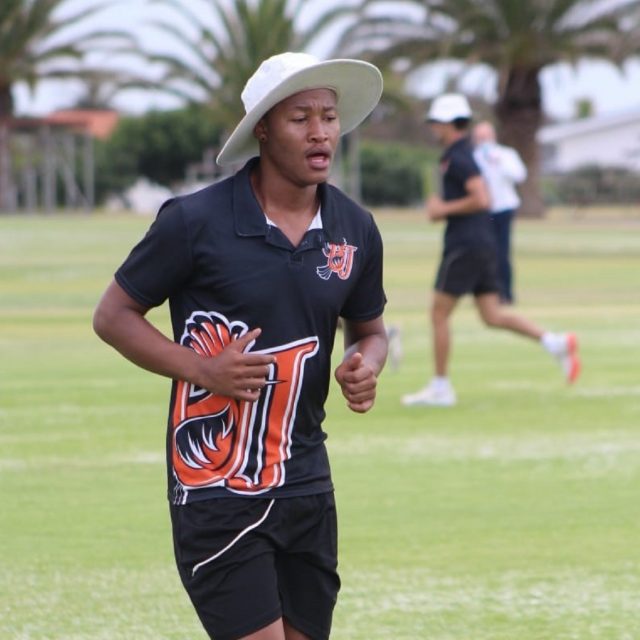