​​​A research article co-authored by Prof Andre M Strydom, Head of the Department of Physics, at the University of Johannesburg, appeared in Nature Materials. The journal ranks among the top most influential of science journals according to the 2010 report on journal citation impact factors (Thomson Reuters).

Nature Materials is published by the Nature Publishing Group, 2011-01-11

Our daily lives are filled with examples of substances organizing and rearranging itself between the three natural phases of matter. These occur through phase changes of matter – from one into another. We know that ice cubes will soon melt inside a lemonade cool drink, that a candle will slowly burn itself out and disappear without any visible trace, and misty clouds will disappear before the sun. Science at the frontiers of knowledge concerns itself with burning questions that are often much less intuitive. There is the search for missing sub‐atomic particles such as the Higgs boson at one end of the scale, and the hunt for distant signs of life in our Universe at the other end. Why do living cells favor the left‐handed version of molecules? Where are the gravity waves predicted by the theory of relativity? Can superstring theory produce a theory of everything – and how many dimensions are there really in nature?​

In efforts to understand the universality that governs how matter changes from one phase into another, one particular field of research seeks to learn what happens when driving a phase change down to the absolute zero of temperature. This is where the very smallest quantities of energy,called energy quanta or quasi‐particles, give rise to primitive and elementary notions of cooperative behaviour. It’s the primordial soup of collective behaviour where nothing but infinitesimal little amounts of energy are available.Consider a New Year’s Ball with a large number of invited guests – all of them complete strangers. As soon as the cocktails are being served by waiters wandering across the room, news about the refreshments soon spread and permeate the crowd. They drift in what at first appears to be a random manner towards the waiters, they soon mingle and become acquainted with one another,they start to group themselves together and befriend each other according to shared interests. As the party fills with the warmth of friendship and the orchestra starts to play, some guests drift towards the walls of the dance hall, while others team up in pairs and start to sway to the music.This behaviour may be likened to that of electrons at very low temperature, – which are tiny atomic particles in matter and found in abundance in metals.A team of researchers joining forces from the Institute of Solid State Physics at the Vienna University of Technology in Austria, the Institute for Solid State Physics at the University of Tokyo, the Department of Physics and Astronomy at Rice University in Houston, USA, and the Physics Department at the University of Johannesburg in South Africa, have now revealed the fascinating importance of spatial dimensions in the origins of phase changes. In the findings of their research, published on January 10 in Nature Materials, they show how the dimensions in which electrons start to become aware of each other before dancing to the music of phase changes should be used to reflect upon the universality of such cooperative behaviour. Much like the guests at the Ball would take to the dance floor in a certain harmony and rhythm befitting the kind of music played by the orchestra, the universality classes of phase transitions have led to our fundamental understanding and indeed to being able to predict, for instance, details of the way in which magnetism occurs in metals and other solids.​​

Phase transitions occurring at extreme low temperatures right at the very birth of miniscule energy excitations have been found to display an astonishing and unexpected variety of physical phenomena which continue to mystify the way in which physicists and materials scientists are used to think about conventional fundamental materials properties. In phase transitions occurring at the absolute zero of temperature, a bewildering set of physical conditions, known collectively as quantum criticality, continue to evade an understanding of the way in which matter self‐organizes itself when tiny amounts of energy are being added at the absolute zero of temperature.An increasing number of types of materials have been brought to the fray of quantum criticality. The object of universality among the materials classes have, however, remained but a dream. The work reported in Nature Materials have shown how to unify some of the most important and well studied quantum critical materials along a new form of alignment: the microscopic dimension of the material. A novel critical material based upon the rare‐earth element cerium was demonstrated to extend the materials class of quantum criticality to that of 3 dimensions. Here, there is no preference for directionality of the forces acting upon and pairing up the electrons. In the dance floor analogy, the electrons are dancing in three dimensions – dancing on the floor, walls, and…dancing on the ceiling.

In an important advance in this research field, the work reported in Nature Materials gives firm support to the involvement of an additional energy scale, denoted by T*, which enters into the very initial pairing and cooperation between electrons. A much debated subject, the consequences of the T*‐energy scale have thus far proven enigmatic to track among different quantum critical materials.Aside from the temperature scale according to which cooperative behaviour can be regulated across a phase transition as an external and independent variable, the additional T* scale appears to be born as a self‐induced, internal energy scale according to which quantum fluctuations are initially permeated throughout the sea of electrons in a metal, and eventually leads to the demise of these fluctuations when cooperative behaviour calls up electrons into systematic and ordered arrangements with length scales that stretch to infinity. The work published by the group of researchers in Nature Materials gives promise of universality in quantum phase transitions, and it paves the way forward for a new thinking of the way in which collective behaviour in matter organizes and arranges fundamental particles. In the world of atomic particles and quantum fluctuations, dancing to the music turns out to be every bit as enchanting as at the New Year’s Ball.

Prof Strydom is Head of the Department of Physics and the Scientific Director of the Central Analytical Facility of the Faculty of Science at the University of Johannesburg. His focus of research is experimental condensed matter physics, specializing in the physics of highly correlated electrons, quantum criticality and phenomena at the onset of magnetic order, and thermal properties of cage-type compounds and complex metal alloys. He has contributed in these fields to the international community through work on synthesis of new compounds and materials, by studying magnetic, thermal, and physical properties, and by connecting features in these properties with fundamental interactions and material and structural properties. 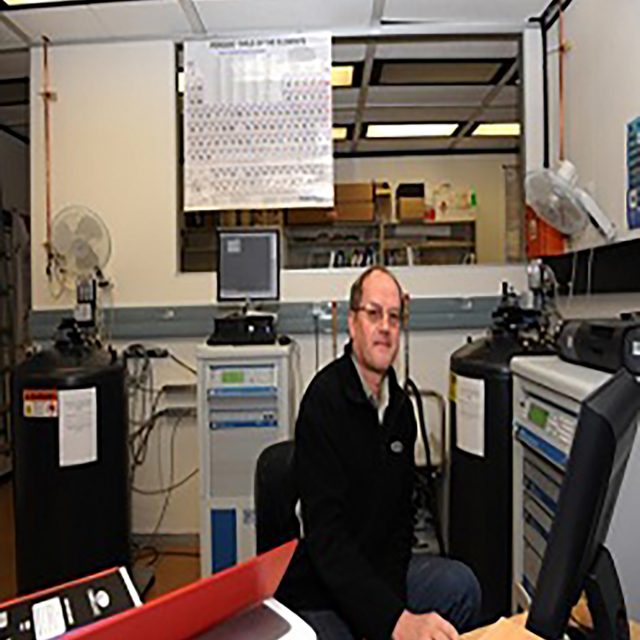