The University of Johannesburg (UJ) alumnae and newly crowned Miss South Africa 2015, Liesl Laurie, and second princess, Ntsiki Mkhize, shared their stories of hope and inspiration when they engaged with the UJ community – mostly students – on Wednesday, 06 May 2015 at the Kingsway Campus Library. “Sometimes we go through so much in life that we end up forgetting what we wanted to become or achieve in life. Perseverance and timing are important,” said Laurie.

This was their first official visit to their alma mater as Miss South Africa 2015 and Miss South Africa 2nd Princess 2015.
The two were speaking about their journey to the Miss SA pageant and what they plan to do for themselves, South Africa and the world going forward. Mostly vested on motivational talk to UJ students, the engagement sought to encourage the youth to take initiative, set goals and develop a game plan in achieving their dreams.
“I was involved in a few beauty pageants before I entered the Miss SA competition, and I had not always reached what I wanted to achieve. But those experiences prepared me to be where and who I am today. Sometimes as young people we want things to be done now – because we are not patient enough. Give yourself time, focus on what you want, and know who you and what your strengths are. Along the journey, dreams do change and it is okay for those dreams to change, because you will learn to get out of your comfort zone,” said Laurie, the young Miss SA from Eldorado Park.​
The second princess, Mkhize, on the other hand, shared her story of how she wanted to become South Africa’s president while growing up. She said that she aspires to be an esteemed talk show host because she looks up to the likes of Oprah Winfrey and Tyra Banks. The bubbly Mkhize encouraged students to have a game plan and to stick to the plan in order to achieve their goals.
She acknowledged that her success is not her sole individual hard work, adding that people succeed because someone out there has contributed to the success. “Embrace the people and things that will help you achieve your goals. Believe in yourself. Have you ever invited your parents to support you in what you do? Do you even inform them of your activities? Maybe they don’t want to interfere in your busy schedule because they may not be educated, but they love you,” said Mkhize.
Laurie and Mkhize acknowledged UJ as a University that gives its students the type of responsibility and accountability that prepares young professionals for any industry. “The UJ brand is so powerful, it allows students to be what they really want to be in life,” said Mkhize.
The two beauty queens hope to contribute to the reduction of unemployment and poverty through their work. “We will do what we can to help bring about change. However, it has to be our responsibility wholly as citizens to develop our society,” said Mkhize.
These are some of the comments by UJ students that attended the event:
Nkosasana Zini, first year student, Bcom Accounting:
“I think Miss SA is a good role model because she doesn’t come from a rich community and a lot of girls in the townships around the country that are not wealthy can relate to her and be inspired that someone from such a background got to where she is now. It also goes to show that it does not matter where you come from, as long as you know exactly what you want, you can compete in a stage full of people from different walks of life. All that matters is that you know what you want and where you want to be, even if your competitors may have had a better upbringing than yours.”
Prudence Nelcious Noamadi, first year student, Public Management Governance:
“I look up to her (Liesl Laurie) because she was a UJ student and met the requirements to enter the pageant. She deserved to win, because of the way she presents herself and how she speaks. When she opens her mouth, you know that she will be saying things that make sense, she commands respect in the manner in which she address people and carries herself.“
Ernest Khathutshelo Hasha, 3rd year student, BA Information Management:
“The challenge put forward by Miss SA of running programmes which mentor young men who are responsible and have the courage to take good care of our women in society is important. The current UJ SRC along with other internal partners are creating a platform called Young Men’s Forum.”
Hasha asked the two beauty queens: “Given the position of influence you have, how will you assist in addressing our triple challenges which are inequalities, poverty and unemployment?” He later concluded, “I believe that there is greatness in all of us. Equality is the main problem we must address by inspiring young people to be go-getters and uplifting their families. You ladies have the power to conceptualise these challenges and come with fashionable ways of eliminating such issues among the youth.” 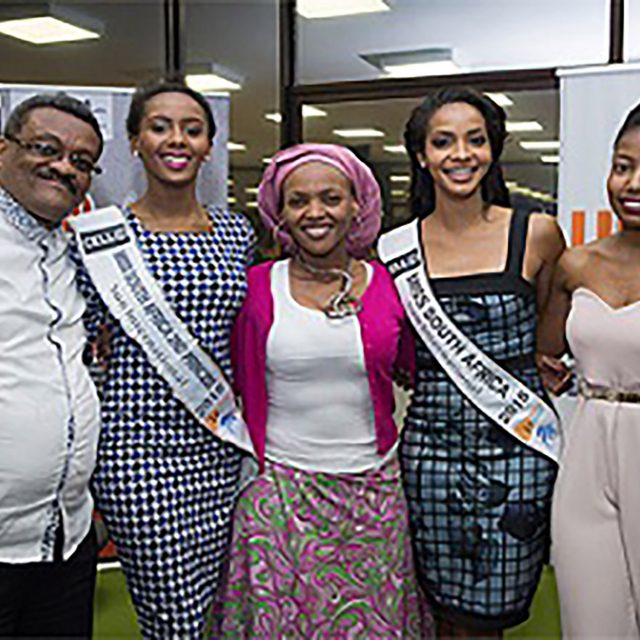