Messengers from the Mantle Exhibition

​The Messengers from the Mantle: Diamonds and Craton Roots Exhibition was developed by the Kimberlite Research Group at the University of Cape Town to highlight scientiﬁc advances in the study of the Earth’s interior and to showcase a selection of the roughly 14 000 unique rock specimens from the Earth’s upper mantle currently held in the John J. Gurney Upper Mantle Research Collection at the University of Cape Town. The Exhibition was developed from 2014 – 2016 and was ﬁrst exhibited at the 35th International Geological Congress in Cape Town in August 2016. Since then, it has been on temporary display at the 11th International Kimberlite Conference in Gaborone, Botswana (in September 2017) and at a private venue in Cape Town.

The Exhibition will be on display from 13 to 21 July 2018 at the Auckland Park Library of the University of Johannesburg for the occasion of the 2018 Geocongress scientiﬁc conference, but it will also be accessible to the public, including school groups and interested individuals, during this time.

It highlights the specimens and science behind a unique research collection of mantle rocks delivered to South Africa’s surface over a long period of geologic time in episodes of explosive kimberlite volcanism. The exhibition has been put together by a team of scientists from the University of Cape Town and the Mineral Services Group under the leadership of Prof. John J. Gurney and A/Prof. Phil Janney. Development of the Exhibition was funded through generous donations from individuals and companies.

The exhibit features rocks that have been collected mainly from kimberlite mining operations all over southern Africa, now archived for scientiﬁc research in the John J. Gurney Upper Mantle Research Collection at the University of Cape Town (previously called the “Mantle Room”), which is the most extensive collection of deep Earth samples from southern Africa in the world. It contains over 14,000 mantle and deep crustal xenolith specimens sourced from more than a hundred localities. The Collection has been, and remains, a destination for mantle researchers worldwide. They have used these specimens to provide insight about the timing and processes involved in the generation of the earliest continental nuclei, the Earth’s Archaean cratons.

Also key to the story behind Messengers from the Mantle are the diamonds brought to the surface in kimberlites. This mineral acts as a time capsule uniquely preserving evidence of ancient and ultra-deep Earth processes, as well as providing information on the timing and nature of diamond formation itself.

For more information about the exhibition, contact Bertus Smith at bertuss@uj.ac.za. 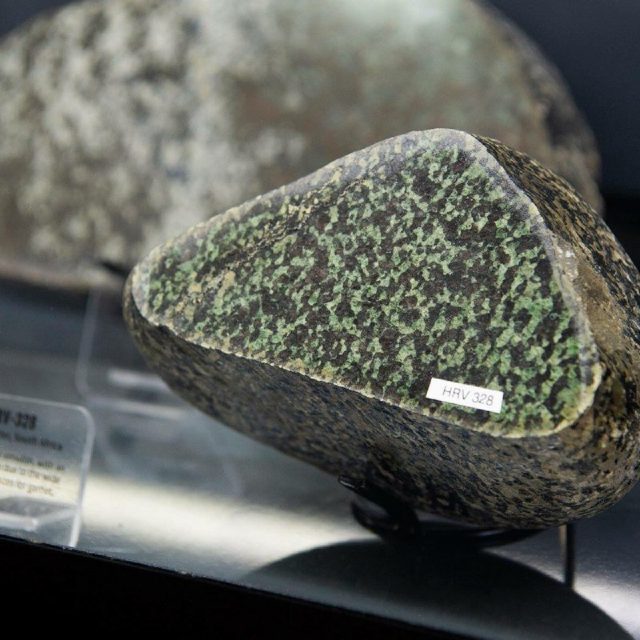 Dear UJ Community, I wish to start off by thanking