The football team of the University of Johannesburg (UJ) has finished in second position in the 2021/22 Men’s Regional SAB League – Blue Stream. UJ was seven points shy of winning the league, ending with 84 points out of 34 matches.

UJ won 27 matches, drew three and lost four. This recent season’s excellent Orange Army performances were reminiscent of the previous season’s prowess. UJ won the 2020/21 league, but were unsuccessful to make it past the provincial play-offs.

Maselesele Makoti was part of the stewards who propelled UJ to the top 2 finish, following in the footsteps of former player and captain Thabang Steven Lebese who lifted the 2021 Varsity Football trophy for UJ. With the tutelage of experienced Coach Karabo Mogudi, Makoti will also be looking to replicate the same energy and ambitions in the upcoming 2022 Varsity Football tournament when UJ defend their title. Lebese has since signed to ABC Motsepe League side, African All Stars in February 2022.

“Leading the team on the field has been amazing. This season, I have seen that the coaches and the players have faith in me and that it is possible to steer the team to glory in any competition,” says Makoti.

Makoti comes from Vosloorus, a township in the east of Johannesburg. He joined the UJ Football Club in 2020. His father influenced his love to play football from an early age. Over the years, he played for his neighborhood team, Alaska FC, and Elspark United Academy, which participated in the Gauteng Development League while he was at Masithwalisane High School. He was scouted by UJ Men’s Football team former head coach, Mandla Zwane, during the One Goal tournament in 2019 and was given a scholarship to study and play football for UJ.

The third-year Sports Management student is no stranger to leading on the pitch as he has captained the Elspark United Academy team the same year he was promoted to the senior team. Makoti was part of the UJ team that won the SAB Blue Steam league and the 2021 FNB Varsity Football tournament.

“2021 was a successful season for us at UJ and it has been amazing to achieve such accolades in my first season with the team. What keeps me motivated is that many players from UJ football are signing professional contracts. So, I also believe that my time will come to be spotted by the big clubs,” he says.

Some of his challenges, like any other player, is getting injured from time to time.

“Playing for the UJ men’s football team is an amazing experience. We have access to everything that professional players have. We have physiotherapists, fitness and wellness coaches. So, playing for this team is a dream come true,” explains Makoti. 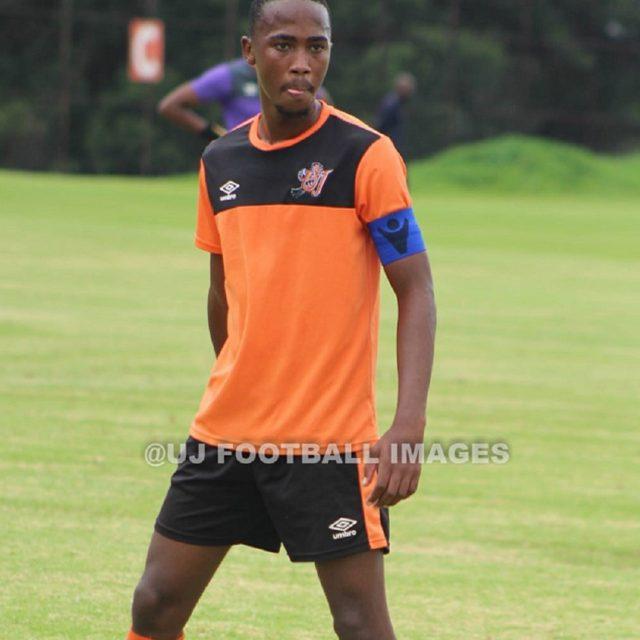