The women’s team remains unbeaten in the AFCON since 1994.

The South African women’s team beat Ghana 3-1 in the final. Their victory also meant that they qualified to participate in the upcoming World Cup which will be jointly hosted by Spain and The Netherlands in July 2022.

At the Theodosia Okoh Stadium, South Africa’s men’s team also caused an upset to the Egyptians in the final of the AFCON tournament, beating them 3-1 on penalties after a 1-1 draw at the end of the match.

Here is a Question and Answer between UJ Sport and Paton on her recent experience in AFCON and the 2020 Tokyo Olympic Games:

[UJ Sport]: You have recently participated at the highest level of competitions in the 2020 Tokyo Olympic Games last year. How was the overall experience in the HOCKEY AFCON in Ghana this year compared to the Olympic experience?

[Kristen Paton]: I don’t think there is a tournament that will compare to the Olympics. However, the opportunity to represent my country and play international hockey will always feel the same – A great privilege.

What was your tournament plan as an individual going to Ghana?

It was the first competition for the year after a long break for me in my personal capacity. My goal was to be simple and ease back into competitive play. It functions as a good spring board for the rest of the year. I was not particularly happy with my performance and felt it was below my standards, but given that I had taken time to deal with aspects of my life outside of hockey, I was satisfied. It lit up the highly competitive athlete in me again which was something that I felt I lost after post the Tokyo Olympic Games.

South Africa won the Hockey AFCON tournament many times. Does this add pressure to the current playing squad before participating in the tournament?

No, I don’t believe it does. For us the objective was to qualify for the World Cup. Winning previous tournaments means absolutely nothing if your current performance is not good. The weight of not qualifying for a World Cup was the pressure. If we are being honest and realistic, we are the best team in Africa and if we did not win AFCON then we certainly would not have deserved a World Cup opportunity. Internally, there was pressure for us to keep our standards of play high.

Who were your biggest competitors?

Zimbabwe were good in our first game. Playing against Ghana in Ghana is difficult. The pitch was not fantastic and we definitely struggled in moments to keep the flow of play going. The umpiring without video referrals always means you are relying on others to see and make the most informed decision, which was difficult. In the end, we managed to win and qualify for the World Cup.

According to your own experience, when you compare the AFCON and Olympics performances, what makes South Africa do well on the African continent and not so well in the Olympics?

Speaking candidly, I think it’s important to note that the quality of AFCON is below international standard in the World Rankings bracket that South Africa are currently in. At the Olympics, we are playing against fully professional teams ranked 1-10 in the world.

I also wouldn’t consider our performances at Olympics as “bad” – I think given the preparation, lack of funding, lack of international competition and COVID-19 restrictions that we competed with top ranked teams. However, our performances were inconsistent.

You have qualified for the World Cup. Do you see the squad challenging for top honours again at that level of competition?

We have a much younger squad than we have previously taken to big international competitions. So, we are in a very different phase. That being said, I think yes we can be competitive and addressing the consistency I’ve spoken about will depend on preparation and exposure to international hockey in the build-up. Younger players need the chance to be exposed to a high level of hockey and as a team we need opportunities for playing more games together.

How many games did you play in? How many matches did the team play in total?

We played 5 games in total and every player played all 5 games.

What inspires you to do well in hockey?

I am highly competitive, motivated and ambitious. My goal is not just to do well in hockey, but to be one of the best international hockey players.

How has UJ helped you be the player you are now, compared to when you joined the University?

I joined the UJ Hockey Club when I was in Grade 11 and have played there since. I have had fantastic coaches, played with some of the best players along the way and have had access to good facilities and personnel.

Please share with the readers anything you wish them to know about you, the sport of hockey in SA and/or the national team.

I would like to highlight that while it may seem like a smaller or less popular sport, hockey is one of the most inclusive sports in the country, played by both males and females across all age groups. At a school level, it is one of the most played sports. We have the potential to compete for a top ten spot in world rankings, just as our national men’s team have done. This largely comes down to support, access to training facilities and financial backing. If there is any way that readers may be able to help facilitate that even by spreading the word then that would greatly help our cause. 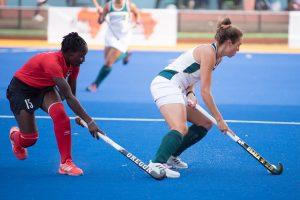 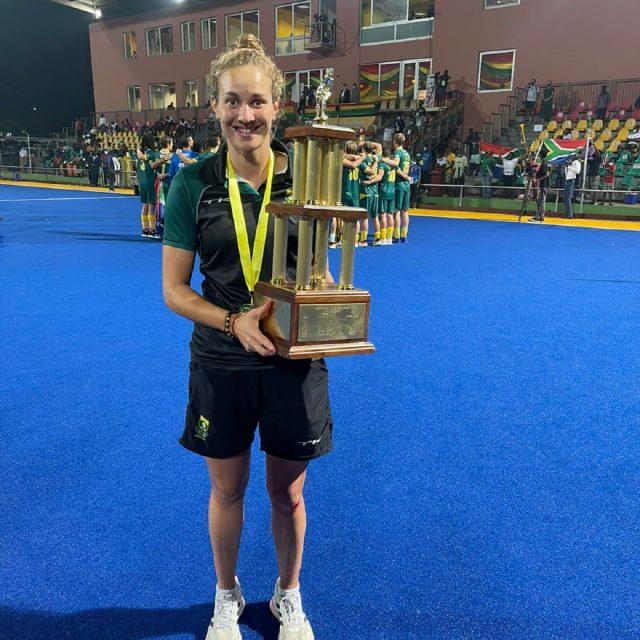