​​​Professor Michael Henning, A-rated National Research Foundation (NRF) researcher, is this year’s recipient of the Vice-Chancellor’s Distinguished Award for Outstanding Researcher of the Year.
Regarded as a world leader in domination theory in graphs, Prof Henning, obtained his PhD at the University of Natal in April 1989. He started his academic career as a lecturer at the University of Zululand, before accepting a lectureship in mathematics at the former University of Natal in January 1991. In January 2000, Prof Henning was appointed a full Professor at the University of Natal, which later merged with the University of Durban-Westville to form the University of KwaZulu-Natal in January 2004. After spending almost 20 years at the University of KwaZulu-Natal and one of its predecessors, the University of Natal, Prof Henning moved to UJ in May 2010 as a research professor.
Prof Henning’s research interests are in the field of graph theory which is a major area of combinatorics. He has made significant contributions to several topics in graph theory and hypergraph theory including colorings, matchings, independence, domination theory, identifying codes, transversals, and digraphs. ​
Prof Henning is regarded as a world-leader in domination theory in graphs. Over the last few years, Prof Henning has combined forces with Prof Anders Yeo, currently at the Singapore University of Technology and Design, and they have focused their research on the interplay of total domination in graphs and transversals in hypergraphs. Prof Henning and Prof Yeo co-authored a book in 2013 entitled Total domination in graphs (Springer Monographs in Mathematics).
Prof Henning was awarded an international award, a Hall Medal, in 2000 that recognises outstanding research achievements by members of the Institute of Combinatorics and its Applications who are not over age 40. Only two Hall Medals were awarded in 2000, the other recipient being an Australian mathematician.
In 2009, he was the recipient of a National Research Foundation A-rating which is reserved for researchers who are unequivocally recognised by their peers as leading international scholars in their field for the high quality and impact of their recent research outputs. The rating is valid for the period 2009-2014.Prof Henning has been a plenary and invited speaker at several international conferences in countries such as the USA, Germany, France, Poland, and Slovakia. He is a prolific researcher having published over 320 papers to date in international mathematics journals. He has over 3,700 journal citations to his articles. He serves as a section editor of five international journals, including co-managing editor of the Japanese based journal Graphs and Combinatorics. 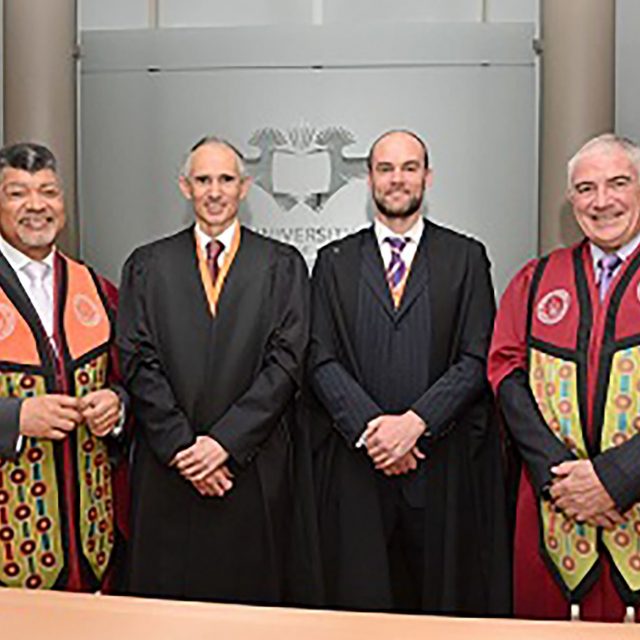